iPhone vs. Android: The Geographic Battle

Which platform dominates your state? For me, it’s iOS. But for most of my relatives it would be Android.

The map of the United States that they provide charts over-indexing in every state. Basically, when ads were clicked, what type of device were the clicks coming from? Most states tended to lean more heavily on either iOS, Android or Blackberry. Only 7 states had a neutral level of clicks per device.

So this graphic doesn’t chart direct sales of mobile devices, but it does chart which phones people are using the click ads. And that gives us a pretty good representation of what type of device is being used most often in each state.

What’s the takeaway? Well, the North, especially the Northeast is dominated by the iPhone. The only southern state that scored one for iOS was Louisiana.

There’s a clear pattern of Android over-indexing in the South and Southwest parts of the country with iOS doing well in the Northeast and Midwest states. 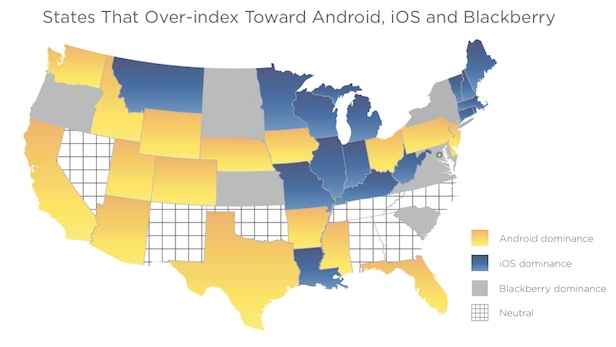 The south and southwest look to be Android country. I’m somewhat surprised that 6 states, on the whole, click more ads on Blackberry devices. All in all, 17 states fall into the Android camp and 17 fall in the iPhone camp (Hawaii, not pictured is #17).

As far as the specific CTR data goes, iOS dominates. The average set by Jumptap is .52%. Apple’s iPhone well exceeds that mark with a .78% CTR. Android and Blackberry fall below the mark at .47% and .36%, respectively.

The uniformity of the iPhone’s browsing and app experiences generates higher advertising interaction. Updates of the Android and Blackberry OS platforms should strive for the same seamless experience.

Although this data is more useful to mobile ad developers, this fun little graphic gives us a pretty good estimation of the popularity of operating systems across America. Are you surprised about which way your state leans? Let us know in the comments.