iOS 4.3 Will Reportedly Give All iPhones Personal Hotspot

Unless you live under a rock, you’ve probably heard that Verizon is getting the iPhone next month. One part of the announcement that excited a lot of people, beyond the extension of the iPhone’s availability was that the iPhone 4 on Verizon Wireless would include new Personal Hotspot capabilities, enabling users to connect up to five Wi-Fi enabled devices.

While Verizon was no doubt hoping that bring a lot of current iPhone users (on AT&T) over to the Verizon network, that parade has been somewhat rained upon, as news has come out that all iPhones will have this feature in time.

Verizon iPhones may get the feature first, but tech blog Boy Genius Report has confirmed (including screenshots) that all iPhones will have the feature in iOS 4.3.

"We’re sure there will need to be carrier support for this feature, and for AT&T users it is entirely possible we might not see this right away," writes BGR’s Jonathan S. Geller. "For those of you with more lenient carriers, however, we are sure you will be pleased to learn that you’ll be able to connect up to five devices over Wi-Fi to the iPhone’s cellular data connection. We are told the OS version will be 8F5148b, the baseband will be 04.08.00, and technical acceptance is planned for March." 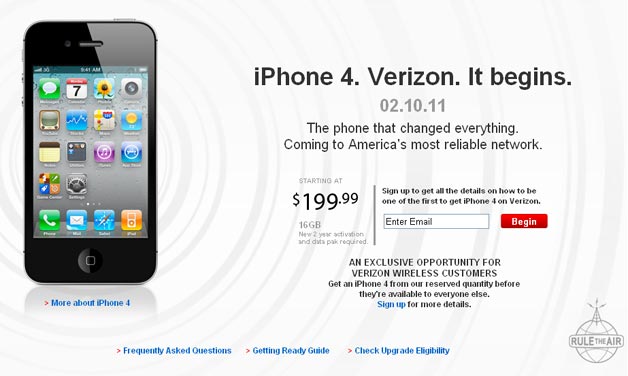 Verizon will begin offering the iPhone 4 on Thursday, February 10, while qualified Verizon customers will be able to pre-order them a  week earlier. The price will be  $199.99 for the 16GB model and $299.99 for the 32GB model with a new two year customer agreement.

The iPhone 4 will be sold at over 2,000 Veizon Wireless Communications stores around the US, as well as online.

More Chrome Notebooks On The Way