Nearly three-quarters (73%) of American Internet users went online in 2010 for news or information about the midterm elections or to communicate with others about the campaigns, according to a new report from the Pew Internet & American Life Project.

That figure represents 54 percent of all voters, and and marks the second consecutive election—and first ever mid-term race—in which the Pew Research Center’s Internet & American Life Project found more than half of all adults using the internet for political activism and to gather information. 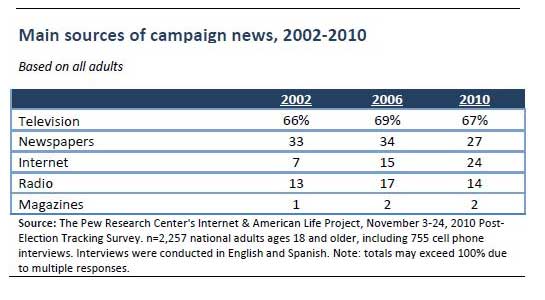 This 73% of online adults includes anyone who did one or more of the following in the months leading up to the 2010 elections:

*58% of online adults looked online for news about politics or the 2010 campaigns, with 32% getting most of their 2010 campaign news from online sources. For Americans under the age of 50, the Internet ranks ahead of newspapers as a source of campaign news.

*One in five online adults used Twitter or social networking sites for political purposes in 2010.

“As the internet has developed as a tool for political engagement and information-seeking, the audience for online political content has also changed,” said Aaron Smith, Pew Internet Senior Research Specialist and author of the report.

“These online spaces are a meeting place where politically engaged Americans of all stripes—young and old, conservative and liberal—can come to catch up on the latest events, share their thoughts on the political news of the day, and see what their friends have to say about the issues that are important to them.”

Americans have a wide range of views about the impact of the Internet on politics:

*54 percent say the Internet makes it easier to connect with others who share their views politically.

*61% of online adults agree with the statement that the internet exposes people to a wider range of political views than they can get in the traditional news media.

*At the same time, 56% of internet users say that it is usually difficult for them to tell what is true from what is not true when it comes to the political information they find online.

“When it comes to online political engagement and information-seeking, Americans view the internet with an appreciation for its benefits but also with some apprehension towards its broader societal impacts,” said Smith.

“Even as they use online tools to connect with fellow activists around the country and track down interesting nuggets of political information, they tend to worry about the influence of extreme points of view and the overall accuracy of the political debate.”