Influence Isn’t Just About Popularity, It’s About Controlling the Conversation

Vocus and Brian Solis partnered to conducted a survey about "What makes an influencer" and how brands can increase their influence. 50% indicated that that the most important action for increasing influence  was to create, post or share compelling content. I posted an article about blogging that pretty fmuch falls in line with this sentiment.

Influence is different than popularity but… An overwhelming 90% of respondents see a big difference between, "influence" and "popularity."  However, qualitative review of open ended comments on this question shows the distinction is not always clear. A follow on question also adds ambiguity with 84% of respondents saying there is a correlation between “reach” and “influence” on social networks. 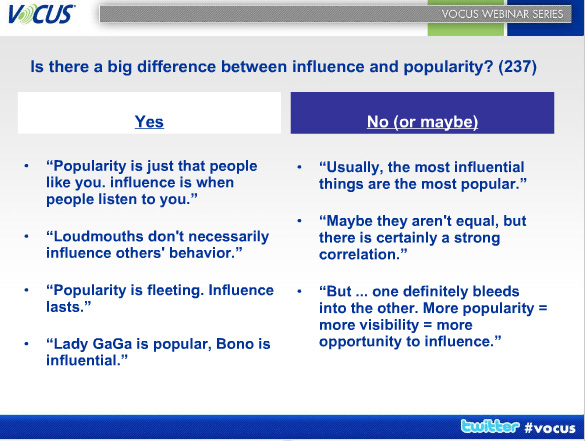 "Influence is the subject of some important conversations lately," says Solis. "Each time we surface questions, answers and new thinking that starts to reshape the landscape for how businesses view, define, and embrace influence."