Internet Explorer 9 got off to a good start in terms of impressing reviewers, and it’s also doing rather well in terms of winning over users, according to new data from Microsoft.  A Microsoft employee indicated this morning that IE9’s early adoption rate is putting IE8’s launch to shame.

Ryan Gavin, Senior Director of Internet Explorer Business and Marketing, wrote on the Exploring IE blog today, “The adoption rate of IE9 is about five times higher then what we saw for Internet Explorer 8 in the same time frame.”

That’s impressive for at least a couple reasons.  First, Gavin pointed out, “As we mentioned on Tuesday, all of our early downloads (through March 27) were user-initiated with over 90% of the downloads coming from non-IE9 RC or Beta users, including over a quarter that came from Chrome and Firefox users.”

Then it’s necessary to remember that IE9 wasn’t even designed to be compatible with older versions of Windows, meaning the pool of potential users isn’t too huge. 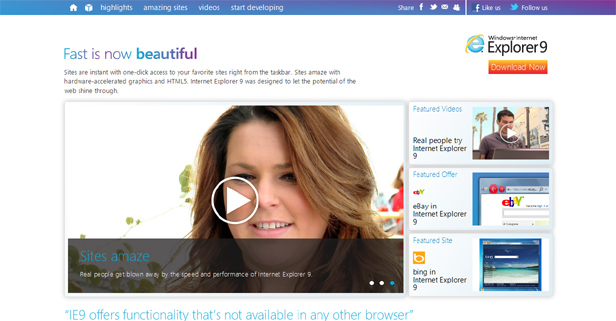 Anyway, if you’re interested in another statistic or two, Net Applications determined that IE9 achieved a market share of 3.6 percent on Windows 7 in March.  IE9 has won more than 1,000 partners, as well, including well-known organizations like Gilt, Groupon, and Slacker.

Then Gavin was sure to note that Microsoft’s own campaign to take down IE6 is working well, as that outdated version of its browser lost another 0.43 points of market share in March, landing at 11.58 percent for the month.