Hyperlocal News: How Big is the Demand?

Would you read a publication dedicated to news about the neighborhood you live in? The web has made an infinite amount of information from all over the world available to you in realtime at a non-stop pace. We now have nearly every piece of news about everything we care about either coming directly to us via social media sites and/or news readers, and the rest is available in seconds via a quick search.

How important is hyperlocal news to you in the grand scheme of things? Is it important enough that this niche of the news landscape, which is both so small and so potentially huge at the same time can find some real legs to stand on and become an important piece of our media consumption puzzles?

As a New York Times piece points out, there have been various attempts at hyperlocal news, which have simply failed, which makes one wonder how much demand there is for this kind of online news. Still, AOL’s Patch.com, the focal point of the story seems to be doing better than most, but that’s with a very small number of pageviews for any given Patch community site (though collectively, the numbers aren’t so bad).

Right now, Patch is only available for a handful of communities in 18 states and the District of Columbia. If expanded across the entire country, and potentially the entire world, one would have to imagine the pageviews being pretty high. The question is, will it make it that far?

How much demand is there, and are the local newspaper and TV sites sufficient enough for most people? Another question is how far down is it worth drilling? For example, in Ohio, there’s a site, not just for Canton, but for North Canton: 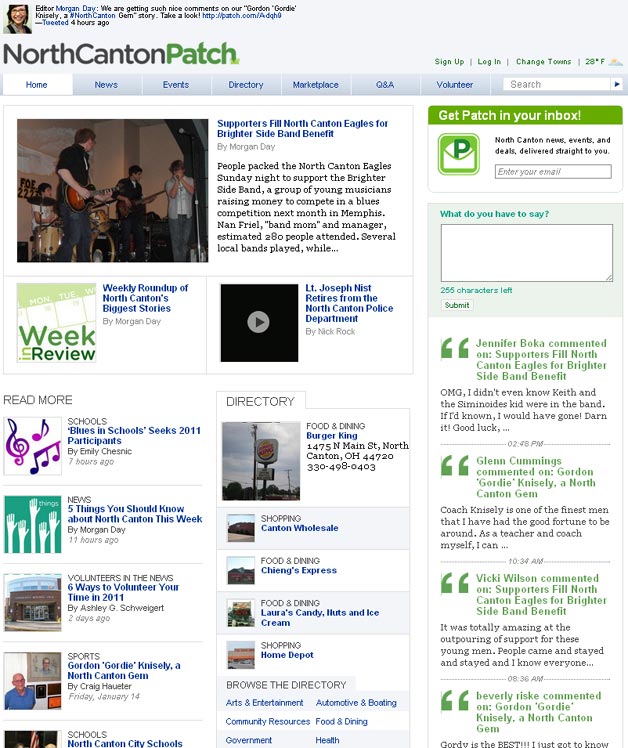 There are many possible factors and variables as to what could make a hyperlocal (especially at the neighborhood level) site work. Perhaps it depends on the neighborhood. Is there a lot of crime in the area? Are there interesting events going on? Does anything happen worth reporting on?

I live in a pretty quiet neighborhood of a fairly quiet town (outside of Lexington) myself, and depending upon the range of coverage, I’m not sure I would find much value in a dedicated site to my area. Though on the other hand, while it is quiet, maybe there’s more going on than I realize, and am only oblivious to this because I do not have such a publication to read.

Ethan Beute, commenting on our Facebook page makes a valid point: "I would not read about 10-year-old Timmy’s game winning double on a neighborhood site any more than I would read a generically-arranged-by-tag cutdown of a city-focused site."

You also have to consider that the smaller of an area a hyperlocal site is targeting, the smaller the pool of potential reporters will be. I can’t imagine that many people in my own neighborhood doing newsworthy things on a daily basis, let alone enough people to find stories specifically related to that neighborhood to report on – especially for a single publication.

That’s not to say it can’t work. We’re in the very early stages of this space, and there’s no way we’ve seen the extent of innovation that will be realized in hyperlocal news. There are others out there trying to make it work. Patch has a good start, but has a very long way to go in terms of breadth of coverage.

Would you read a publication dedicated to news about you neighborhood? Discuss in the comments or on our Facebook page.