ChompOn has released some interesting findings (pdf) related to social media sharing and its value to e-commerce. Specifically, the firm sought out to answer the question: "What is the value of a social action in online commerce?"

"Admittedly, we believe the true value for likes and follows to be much higher due to creation of long-term loyalty," says ChompOn. "Additionally, it is not possible to directly attribute traffic from these actions so it was necessary to estimate. 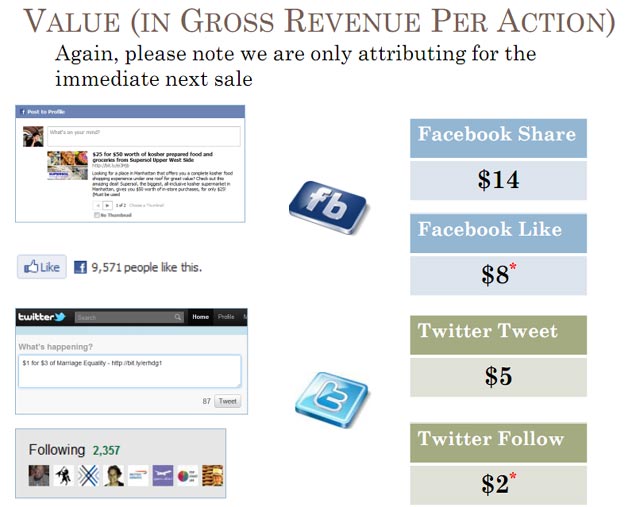 Obviously, you have to take into account their methodology, which is where that estimation factor comes in.

"For shares and tweets, we were able to directly attribute sales to the original action, so we simply took the total revenue attributed to each action and divided it by the total number of shares/tweets," the firm says. "For likes and follows, we had to estimate attribution by looking at our traffic references and subtracting out purchases made through shares/tweets as well as purchases made through direct traffic."

ChompOn is also careful to point out that gross revenue depends on the products and services being offered.

In reality, you may find a greater dollar value in all of these social interactions, or you may find now dollar value at all. There are a lot of potential variables to consider, but if nothing else, it shows that you can indeed place a dollar value on a tweet, on a "like", etc.

That’s really the moral of the story. Many complaints have been voiced about a lack of measurable ROI when it comes to social media. If you have this complaint, it may be time to re-evaluate your measuring strategies.

Bing Gets Behind "Future Of Search" Series