Daily deals site Groupon has just announced a partnership with online travel company Expedia to bring deals to travel. The service will be called “Groupon Getaways” and will start in the U.S. and Canada with plans to expand to other countries in the near future.

Apparently, the travel deals will work the same way as Groupon daily deals. Customers will have a limited amount of time to buy certain deals for future use. No word on whether or not there will be the same kind of buyer minimums for activation. According to Expedia, “discounts will be significant, typically around 50 percent off retail rates found at other online travel sites.” This sounds consistent with the type of discounts currently offered by Groupon.

@Groupon
GrouponThe weather is here, wish you were beautiful. Groupon + Expedia gets you there cheaper. http://gr.pn/knZcm6

52 minutes ago via web · powered by @socialditto

1 hour ago via Social Marketing Suite · powered by @socialditto 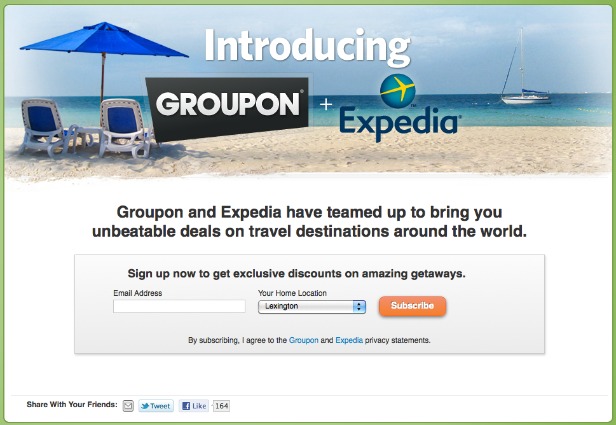 According to Tech Crunch, the deals will most likely be regional, instead of super specific and local. They also say that Groupon was also in talks with Priceline and Travelocity before making the final deal with Expedia.