It looks like China has found another way to strike back following Google’s decision to redirect Google.cn users to Google.com.hk.  The search company is reporting that its mobile service in China is now "partially blocked."

This information was disclosed through the "Mainland China service availability" page Google established after making its somewhat dramatic semi-exit.  And as you can see below, "mobile" is the first service to have its status change since the page debuted. 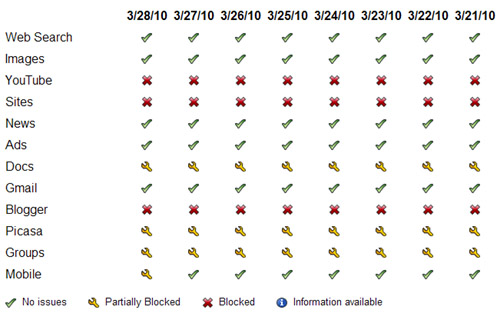 This appears to signal that China’s stepping up its show of disapproval.  Indeed, Google’s mobile-related problems in China are really starting to accumulate; China Unicom and Motorola both split with the company last week, and it’s rumored that China Mobile will do the same in the near future.

(Pressure from the Chinese government is thought to be a motivating factor in every instance, in case you couldn’t guess.)

Anyway, a hat tip goes to David Sarno.  One other detail worth noting: Google’s stock is down the tiniest bit at the moment (0.02 percent versus the Nasdaq’s gain of 0.54 percent), perhaps as investors express their unhappiness about the idea of losing another revenue stream.