Google has announced via Twitter that its much anticipated deals service “Google Offers” has gone live.  Google Offers Beta is kicking off with deals in Portland, Oregon.  Google Offers was first announced a few months ago and people obviously predicted that it could be a huge competitor for services like Groupon and LivingSocial.

27 minutes ago via web · powered by @socialditto

Upon visiting the Google Offers site, you are prompted with the question “What will Google offer?”  Below that you see “Get 50% off or more at place you’ll love.”  Users can then subscribe to email alerts in 6 areas: NYC Downtown, NYC Uptown, NYC Midtown, Oakland, Portland and San Francisco. 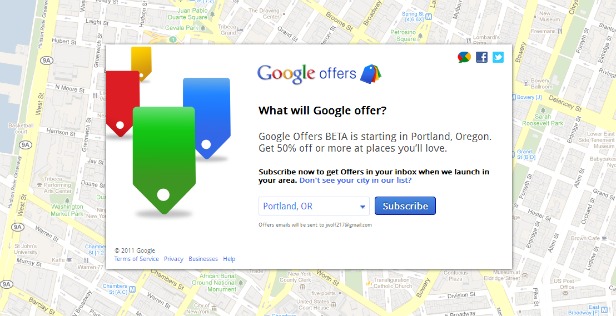 There is also a link to a page that allows you to give Google your email address and zip code, so they can notify you when they make Google Offers available in your city.

Google Offers is not quite dispensing out deals yet, but they say they will eventually begin sending subscribers “regular emails letting [them] in on amazing offers in [their] area”

Since Offers is not currently available for my city, I subscribed to the Portland, OR Offers service and received this email: 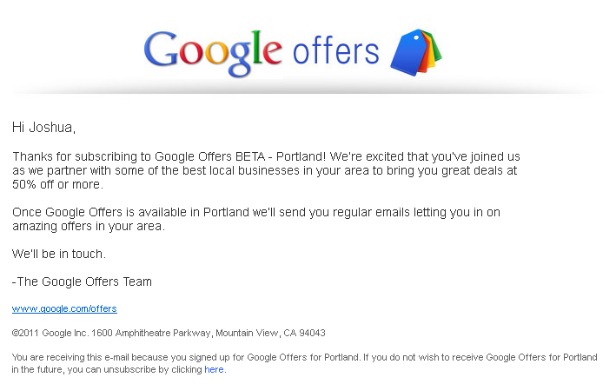 There is no telling yet whether Google Offers will become a direct competitor to Groupon and other daily deals sites.  Obviously, the format of subscribing to an email list and receiving offers is dead-on the Groupon M.O.  The last few months have been a little rough for the former daily deals leader as LivingSocial has made huge strides in revenues to compete with Groupon.  This might add another problem for Groupon, and possibly make them truly regret not selling to Google for $6 billion when it was offered.

Sorry, Folks. It's Not Always About the SEO.