Harris Interactive has just released its annual Reputation Quotient Report, the survey that ranks top “visible” companies based on the U.S. general public’s impressions of the company’s reputation.  This year, we have a new most reputable company in America – Google.

This year marks the 12th consecutive year that Harris has released the RQ poll.  This years’ poll looked at 60 top companies.  The poll took an online format and involved 30,104 people.  The “Reputation Quotient” is a number score out of 100 that is based on six categories of review – social responsibility, emotional appeal, products & services, workplace environment, financial performance and vision & leadership.  Scores are broken into rankings – 80+ being excellent, 75-80 very good, 70-75 good and 65-70 fair.

Google topped the poll with a combined score of 84.05, which is excellent.  Google ranked in the top 5 on all but one of the previously named categories of review.  The one from which they fell out of the top 5? Emotional appeal.  Johnson & Johnson placed second for the second year in a row with a score of 83.13.  3M rounded out the top 3 with a score of 82.56.

Last year’s winner Berkshire Hathaway fell to fourth place and with recent location tracking issues not a factor in the survey, Apple made a big move from 12th to 5th.

The bottom three on the list of 60 are Goldman Sachs, BP, and AIG – three companies who have had their share of bad press in the past few years.  AIG’s score was a meager 47.77, almost 20 points away from just a fair rating.

Here are the rankings for each category: 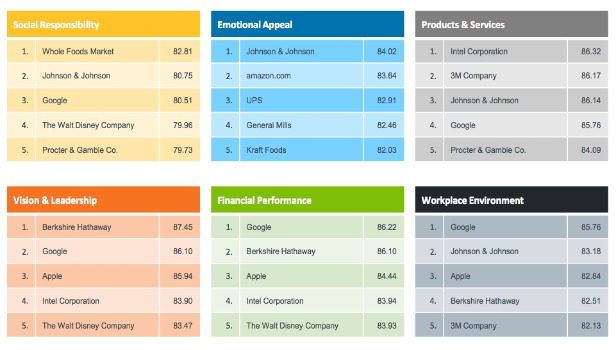 An interesting find within the survey is that overall reputation rankings of all industry are up from last year.  Is it possible that people are at least attempting to restore trust for some maligned sectors?  Financial services sector positive rankings jumped up 6 percent from 2010.  No industry declined.  Even the Tobacco Industry held firm at 11% positive ratings.

The most positively viewed sector is Tech, with a 75% positive rating.  The biggest jump in approval ratings was within the automotive sector, improving 15 points over the course of the year. 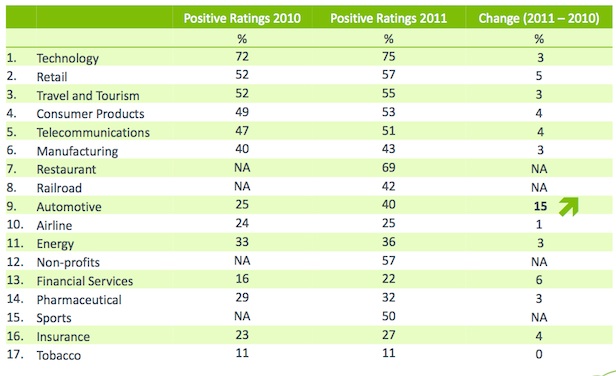 So what characteristics makes a company fall into that good-excellent reputation rating?  Here is Harris’ observation:

Companies that receive good-excellent reputation ratings are those that can be characterized as companies that “support the infrastructure” of the lives of the American public, both personally and professionally.  These infrastructure companies fall into two camps.
–    Those that are so solidly reliable that they let me perform my personal and work tasks without having to think about them
•    This is particularly true of those that are part of the long-term elite reputation companies

–    Those that delight me or enrich my life
•    With minor exception, this is true of those companies that are on the path to join the long-term reputation elite

What is the long term reputation elite that they refer to?  It describes companies that have received a 75+ rating for the past 10 years.  These companies include Johnson & Johnson, Sony, 3M, Coca-Cola, Microsoft, UPS and FedEx.

Wonder if Google can become one of these long term elite companies?

This Just In … News No Longer Breaks, It Tweets