Google has announced that it is now using OpenID for its signup process. Yahoo users can sign up for a Google Account with their existing email address.

Google says that "a much larger number of people" complete the email verification process when OpenID is used.

"Some websites use the OpenID standard so that users don’t even need to type a password to sign in," says Tzvika Barenholz of Google’s Internet Identity Team. "While Google does not yet support the usage of OpenID for replacing passwords on its own sites, we are involved in the OpenID community’s efforts to research how to best implement that type of support."

When a Yahoo users signs up, they will see the following page, and when they click the verification button, they will get the page under that from Yahoo. 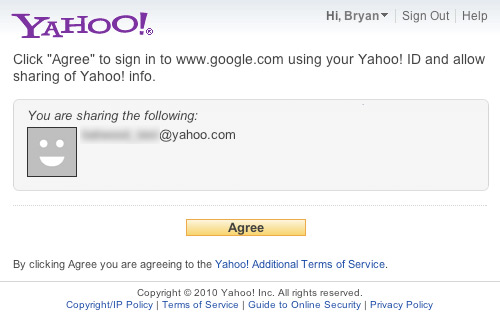 "Other websites that need to verify a user’s email address can also implement this technique using Yahoo!’s OpenID API," says Barenholz. "In addition, it can be used to verify the addresses of Gmail and Google Apps users because those email systems expose the necessary APIs for OpenID. For example, Plaxo is one of the many websites that takes advantage of this feature of Gmail and Yahoo! Mail."

Google is currently only offering the OpenID feature for Yahoo users, but it intends to expand support to other services.