Google has been rigorously responding to user feedback about its recently launched Buzz social media product, and adjusting the service as it sees fit. There has been a lot of criticism about user privacy associated with Buzz, and after making a few adjustments late last week, over the weekend, Google announced some more.

Google is switching to an "auto-suggest" feature as opposed to the "auto follow" feature, which has created much of the criticism. Now instead of Google making users automatically follow people from their Google contacts, it will simply offer some suggestions for people to follow, not unlike Facebook or Twitter. 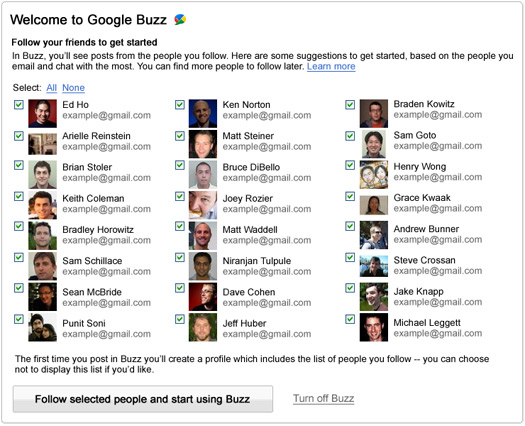 Late last week, there were some reports that Google was considering separating Gmail from Buzz entirely, but these were not accurate. Google provided a statement saying, "No, we’re not planning to remove Buzz from Gmail. Among some of the features we’re considering is building a standalone Buzz experience in addition to the one in Gmail at some point in the future."

Google’s latest round of Buzz adjustments includes a way to turn Buzz off in Gmail. They’re adding a Buzz tab in Gmail settings, where users can hide Buzz from Gmail or disable it completely. There will also be a link to those settings from the initial start-up page so users can easily decide that they don’t want to use Buzz from the beginning.

"It’s been an exciting and challenging week for the Buzz team," says Buzz/Gmail Product Manager Todd Jackson. "We’ve been getting feedback via the Gmail help forums and emails from friends and family, and we’ve also been able to do something new: read the buzz about Buzz itself. We quickly realized that we didn’t get everything quite right. We’re very sorry for the concern we’ve caused and have been working hard ever since to improve things based on your feedback. We’ll continue to do so."

Despite a somewhat Rocky start, Buzz is already showing a great deal of potential for businesses. Some even think Facebook has something to worry about. It’s probably a little early to go that far, but anything’s possible. Do you think Buzz will be a success? Share your thoughts.