Former Google CEO and current Google executive chairman Eric Schmidt spoke at the All Things Digital D9 conference, and revealed that Google has renewed its search deal with Apple. Google will remain the default search engine on iPhones and iPads.

There have recently been some questions about whether Apple would stick with Google Maps in the upcoming iOS 5, or abandon it in favor of a technology of its own, but that appears not to be the case. Google Maps will reportedly continue to get featured placement on iOS devices.

Danny Sullivan, who liveblogged Schmidt’s comments at D9, quotes him as saying, “We have a very, very good partnership,” and that both the search and maps deals have been renewed. He didn’t reveal any more details about the deals.

The search deal especially, could be critical for Google in keeping Bing from gaining a significant amount of search market share (or at least an even more significant amount than it’s already poised to gain). Bing should be getting some nice boosts from the Windows Phone platform, as well as deals with Nokia and RIM (and watch out if Microsoft ever decides to put a proper browser with Bing as the default search engine on Xbox).

While Android has been doing incredibly well, Google remaining on the very popular iOS devices matters. Given that Apple is about to introduce the next generation of iOS itself, one can only imagine that a new wave of consumer interest is on the horizon.

The maps deal matters, as it is simply an extension of search, and obviously an important one on mobile devices. Bing just launched some new streetside view technology for its own Maps service.

While Google (and Schmidt specifically) has repeatedly referred to Microsoft as its main competitor, Schmidt spoke about what he calls the “gang of four” companies that are dominating in consumer tech. This includes Google, Apple, Amazon, and Facebook – no Microsoft. When asked by interviewers Kara Swisher and Walt Mossberg about Xbox, Schmidt downplayed the wildly popular gaming console, saying that “it’s not a platform at the computational level,” and that Microsoft is still fundamentally about Office and Windows (as quoted by All Things Digital’s Peter Kafka). 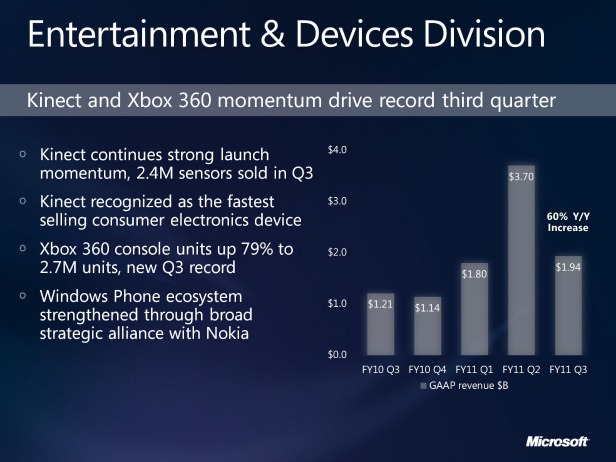 It’s also clear that Xbox is becoming less and less about just gaming. According to Microsoft, 40% of all activity on the Xbox 360 is non-gaming activity, meaning that users are spending nearly half the time on the console watching streaming video. Users can stream movies and music through Zune, which might be getting a rebrand. Again, look out if they simply throw a browser into the mix. I wonder if Microsoft has anything like that.

It’s very interesting that Schmidt would downplay the significance of the Xbox, given the less-than-stellar launch of Google’s entry into the living room – Google TV.