Happy Tax Day! Or sad tax day, depending on the level of your refund or lack thereof.  Due to a Federal holiday, the deadline to file your 2010 taxes was extended to today, the 18th, as opposed to the traditional date of April 15th.  That means today is the last day to find out what little scrap Uncle Sam might throw back your way, if any.  In honor of our annual dealings with the IRS, Google has announced the winner to its Data Viz Challenge.

The Data Viz Challenge, launched by Google in February, was a competition for developers to create visualizations that respond to the question, “How will the government spend our money?”  Here is the original premise for the competition:

Every year, Americans fill out income tax forms and make a payment to the IRS. It’s an important civic duty, but it is also a lot of money. Where does it all go? Using data provided by WhatWePayFor.com, we challenged artists, coders, and the general public to create data visualizations that would make it easier for U.S. citizens to understand how the government spends our tax money.

After more than 40 unique entries, Google selected “Where Did My Tax Dollars Go” as the grand prize winner.  The winner was chosen because it was both “information-rich” and “elegantly designed.”  The winning visualization was able to take boring and complicated info and make it widely accessible, according to Google. 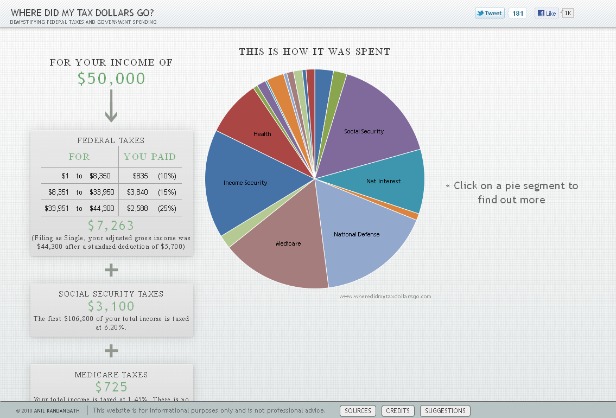 In this visualization, we are presented with hard statistics, for example: for a single person making $50,000 a year, $1867 of their federal taxes goes towards national defense, while $303 goes to Veterans Services.

I particularly liked the runner-up visualization, entitled “Every Day is Tax Day.” After inputting your annual salary and the year you want to see (1984-2015), a giant clock will tell you how many hours and minutes of every day you are working for different departments of the government.  Of course not literally, but the visualization shows that because of federal taxes, over 2 hours of a 9 hour work day are basically spent working for Uncle Sam. 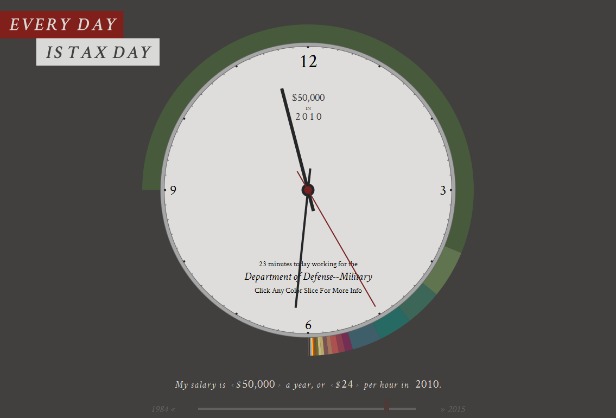