If you want to boost sales for your business, kill an elephant.

No, seriously – take a video of yourself shooting an elephant in the dark as well as the subsequent slaughtering and throw it up on YouTube. Then, advertise said video all over Twitter. Once you start to receive any backlash, double-down on your position that said elephant killing was the right thing to do.

I’m sure this storyline is beginning to sound familiar to you. When GoDaddy CEO Bob Parsons did all of the above things back in March, many wondered how it would affect the company. The outrage was overwhelming.

Not only did people threaten to pull their sites from GoDaddy’s services, but other companies attempted to cash-in on Parson’s faux pas. NameCheap offered domain transfers for special prices, even donating 25% of their revenue to Save The Elephants. They tweeted that they raised over $20,000 for the charity. Venovix followed suit, offering to donate revenue generated from domain switches to the International Elephant Foundation. This promotion was cleverly titled “NoDaddy.”

And man did Parsons piss off PETA.

It appears, however, that all the outrage and publicized domain switching hasn’t really translated into people leaving GoDaddy. On the contrary, new figures show that they have raised domain registrations 8% and their sales rate 4% following the elephant shooting.

Flippa has released an infographic for their first “State of the Website Economy” report. To see that full infographic, check out their blog post. The pertinent GoDaddy part of the report is this: 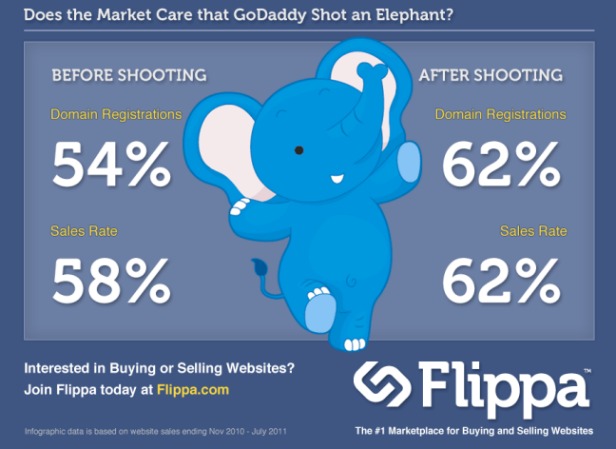 There was an uproar and threats of GoDaddy boycotts from across the globe when Bob Parsons shot an elephant in Zimbabwe, but the event failed to resonate in the long-term as website creators continue to use GoDaddy. In fact, their share of registrations seems to have increased since the shooting, and their share of website sales hasn’t diminished when looked at relative to the rest of the website market. We doubt the event even factored into GoDaddy’s $2.25 billion sale to private equity firms last month!

Earlier this month, GoDaddy sold itself to three private equity firms for $2.25 billion. Parsons said that it “isn’t a sale. It’s a partnership that’s reinvesting in Go Daddy.”

Parson, the wonderful well of Twitter activity, tweeted about his role in the restructured GoDaddy. In response to a user asking about the future of his video blog, Parson replied with this tweet –

@DrBobParsons
Bob Parsons@DanSodkiewicz Hi Dan, I’m going to keep doing it. I will remain Chairman at GoDaddy and also am the largest single investor in the co.

21 days ago via web · powered by @socialditto

His latest tweet comes from Wednesday. I wonder what PETA will have to say about this one –

@DrBobParsons
Bob Parsons@Yellsback Hi Kate. No animal catches mice/rats like a Jack Russell terrier. What takes cats weeks they do in a day or so.