GameStop has tapped Adgregate Markets to provide social shopping on its Facebook page via Adgregate’s proprietary ShopFans solution. GameStop, which is ranked #115 on Internet Retailer’s Top 500 List and 3rd in the sub-category of Toys/Hobbies, is the first multichannel gaming company to launch a storefront on Facebook and provide social commerce to its more than 1.8 million Facebook fans. 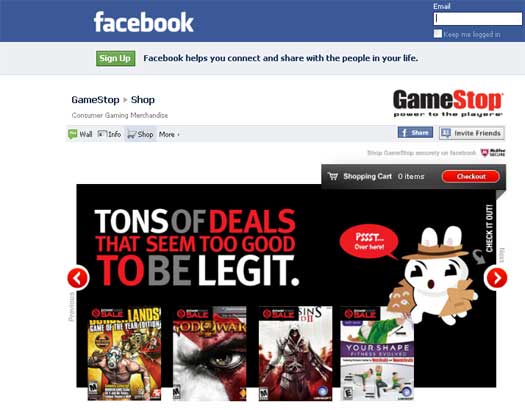 “Social commerce on Facebook is a natural complement to our trusted store and online networks,” said Kelly Mulroney, vice president of ecommerce at GameStop.

“We have millions of customers already engaging with us on Facebook, and ShopFans gives those loyal fans more reasons than ever to shop GameStop across multiple channels.”

GameStop says it is introducing two industry “firsts” including allowing fans to pre-order popular games for guaranteed in-store delivery pick up and it will allow fans to earn and redeem points when making purchases on Facebook via its PowerUp Rewards loyalty program, which currently has more than eight million members.

“We are on the cusp of the Second Internet (the Social Internet) where retailers that leverage interconnectivity and engage with their customers in the dialogue in creative and authentic ways will be the clear winners,” said Lou Kerner, Social Media Analyst for Wedbush Securities.

“GameStop’s new Facebook store provides a blueprint for the new social store, where design, usability, and the cool factor are now seamlessly integrated with the Facebook social graph. This store is a game changer for the burgeoning f-commerce industry.”