Give a penny, take a penny – that’s the concept behind Jonathan Stark’s new “experiment in social sharing.” He has put a picture of his Starbucks card online so that anyone in the world can use his account to purchase a cup of coffee.

Just save the photo on your smartphone, go to your local Starbucks, and scan the barcode. Simple as that. You’ll have a free cup of piping hot coffee.

And before you ask, no, this is not a marketing campaign from Starbucks. Stark addresses that on his site by saying, “In case it wasn’t obvious from the complete lack of design, this site is totally not affiliated with Starbucks.” Don’t knock your site design Jonathan…it’s clean and easy to navigate! 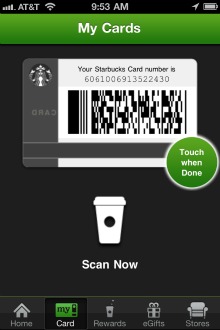 Of course Jonathan’s card doesn’t have an unlimited balance, and without the second part of the experiment its funds would be depleted in no time. That’s the karma part – “If you’re feeling generous,” he says, “you can also add money to my Starbucks card.”

Yes, people are asked to participate in both sides of the experiment – getting coffee for free and giving coffee to others. If you want to donate to Jonathan’s card, simply go to the Starbucks website and click “reload a card.” His card number is 6061006913522430, FYI.

Johnathan’s Starbucks card has its own Twitter account and Facebook page, with almost 13,000 followers and 4000 likes respectively. The twitter account posts balance updates every few minutes and by the looks of it, the digital card must be hot with use. Within the last 30 minutes, the card has gone from a balance of $28.11 to $16.95 to empty – and then back up to $25.00 to $8.04 to empty. As of just a few minutes ago, someone loaded $100 onto the card.

The Facebook page contains various types of posts. Some are simply saying that it’s a great idea, others are letting everyone know how much they just added to the card. Some are even posting photos and videos of the “experiment” in progress. 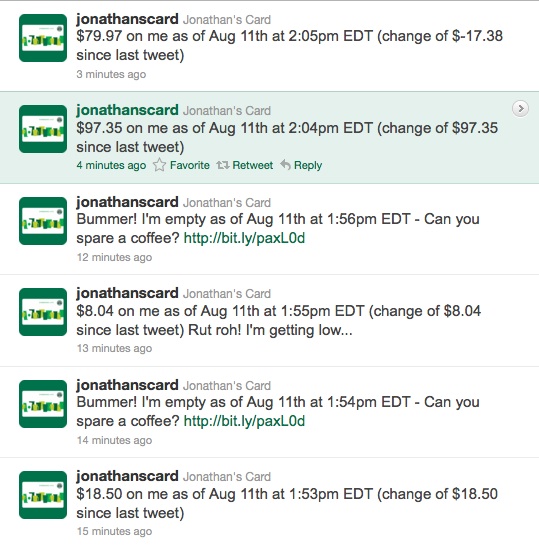 Apparently, the card started with a balance of $30. Since then, over $10,000 worth of transactions have been made, both in debit and credit.

“It’s been a bit emotional, actually,” Stark told CNN. “People’s reactions have ranged from accusing me of stealing to thanking me for renewing their faith in humanity.”

What do you think of this experiment in social giving? Let us know in the comments.