Location-based check-in app Foursquare is announcing a brand new notification system that looks to encourage interaction with all facets of the service, not simply the checking-in part.

They have just announced a new “notification tray” that will organize all your Foursquare-related activity into a single timeline. At first glance the new layout appears to look similar to notifications on the official Facebook app.

Here’s what will show up in the notification tray, according to the 4sq blog post –

They have also announced a new “mute” feature that works with the new notification tray. This will allow users to turn off notifications for either an hour or “until tomorrow.” 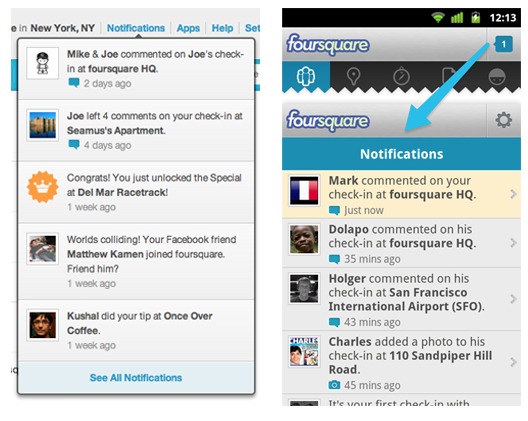 The update to the app is only available for Android right now. iOS users will have to see the new notification system through foursquare.com for the time being.

Foursquare says this will give users a “great reason to open the app or visit foursquare.com” even if you’re not planning on checking-in. They also say that this new notification system falls in line with their “going beyond the check-in” strategy for the future.

With the emphasis that these notifications have on comments, tips, to-do lists and such, it seems to me that Foursquare is trying to legitimize its service as an all-inclusive social network on its own – not just an app to check-in and steal mayorships. By focusing on things like check-in comments, Foursquare seems to be hoping that users will stay inside the confines of Foursquare to do their social networking.

Is this a viable goal? The service is still growing, and fast for that matter. Just a couple of weeks ago they announced the all-important 10 million user milestone. This figure signified a 2 million user increase since March. Other stats pointed to widespread user interaction as well, such as the fact that close to 80,000 mayorships change hands each and every day.

But Foursquare is quite connected to Facebook and Twitter as of right now. On the check-in interface, posting your updates to the other two social networks is as easy as tapping one button – it’s built right in. After that, a user’s Facebook friends can comment on the check-ins. And since people on the whole have more Facebook friends than Foursquare friends, Facebook provides a larger population of possible interaction when it comes to check-ins, mayorships and other Foursquare announcements.

But Foursquare still has a lot of appeal with it’s gameification of the location-based service. Mayorships, badges and leaderboards are at the heart of the app’s appeal.

“In our testing, we found the notification tray made our foursquare experience feel a ton more connected. We hope you like it, too!” they say.

Can Foursquare expand “beyond the check-in?” Let us know what you think.

Is a Talent Show What Justin Timberlake Has in Mind for Myspace?