By most accounts, Firefox 4 represents a big success. It’s received positive reviews and been downloaded a massive number of times. So to celebrate the Mozilla team’s achievement and provide a bit more perspective, a new infographic takes a look at how the browser got to this point.

Credit for constructing the infographic goes to Pingdom, and if you’re curious, the stats come from a combination of Mozilla, Wikipedia, and Net Applications. Now let’s dive into the data. 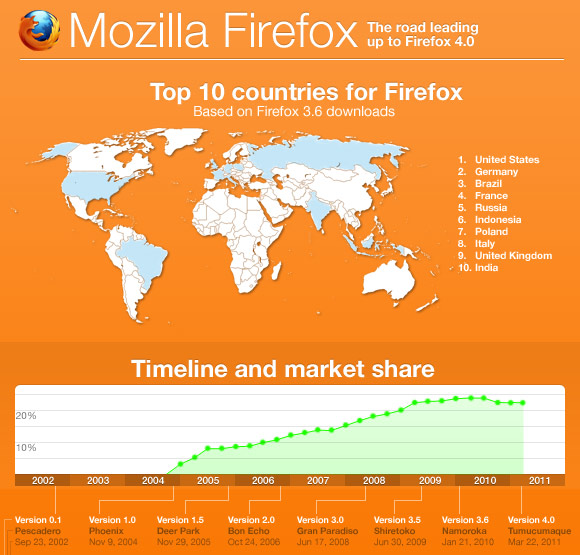 One section of the infographic explains that there have been over 1.35 billion Firefox downloads since 2004, and there are currently around 400 million Firefox users worldwide. Also, to drive home the point that Firefox has been successful on a global scale, Pingdom pointed out that over half of users utilize non-English versions of the browser.

As for some info about add-ons, it seems more than 200,000 of them have been created, at least 33 percent of users have one installed, and there have been a total of 2.4 billion add-on downloads.

Those are some impressive figures, especially considering that Firefox had to compete head-on with Internet Explorer right from the start (Pingdom reported that IE held a market share of over 90 percent when Firefox 1.0 launched). Not a lot of other products could have survived Microsoft’s full attention at that point in time.

By the way, to return to the present, the official download counter for Firefox 4 has shot up and up since its release, and as this article’s going live, it currently sits at 17,090,377.