So as not to mislead anyone, we’ll be clear from the start: Facebook’s nowhere close to overtaking Orkut in terms of unique visitors in Brazil.  But new comScore stats at least show that Facebook is growing at an amazing rate, and Twitter’s doing well for itself in the country, too.

Facebook saw its user base increase by 479 percent in the last year, according to comScore, which means its audience has gone from roughly 1.5 million visitors in August of 2009 to 8.9 million in August of this year.  Not bad.

Twitter, meanwhile, about doubled the size of its user base, hitting 8.6 million this August, and comScore noted in a statement, "Twitter.com reached 23 percent of the entire Brazilian online population, the highest penetration in the world." 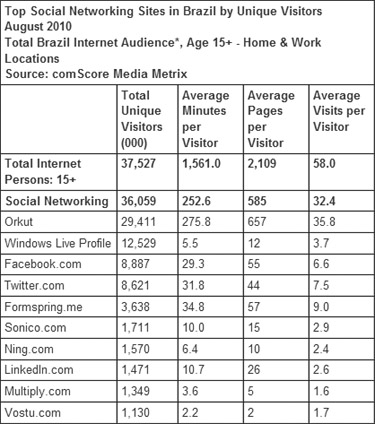 That last set of stats might act as an argument in favor of the success of Google Me.  Or, since Facebook’s beaten Orkut just about everywhere else in the world and is closing the gap in Brazil, maybe comScore’s report indicates Google doesn’t have a good understanding of social media.  We’ll let you decide.

Either way, another tidbit is that "[t]raffic to Social Networking sites grew 51 percent in the past year, with sites in the category currently reaching more than 36 million visitors age 15 and older."