Earlier this month, Time magazine named Mark Zuckerberg "Person of the Year," and now, although Experian Hitwise isn’t in the business of handing out such titles, it looks like Zuckerberg’s site has become the online equivalent.  Experian Hitwise announced late yesterday that Facebook was both the most visited site and most searched-for term of 2010.

The information services firm explained with respect to that second achievement, "This is the second year that the social networking website has been the top search term overall, accounting for 2.11 percent of all searches.  Four variations of the term ‘facebook’ were among the top 10 terms and accounted for 3.48 percent of searches overall."

Then, in relation to traffic trends, Experian Hitwise’s statement continued, "Facebook was the top-visited Website for the first time and accounted for 8.93 percent of all U.S. visits between January and November 2010.  Google.com ranked second with 7.19 percent of visits, followed by Yahoo! Mail (3.52 percent), Yahoo! (3.30 percent) and YouTube (2.65 percent)." 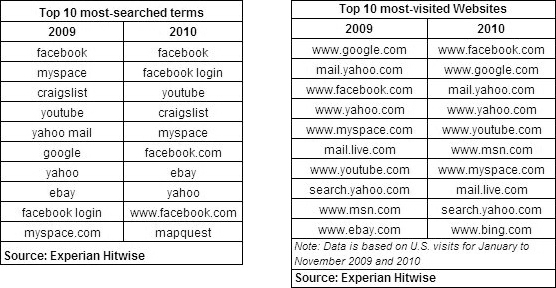 Obviously, this is great news for Facebook.  The search data might be a little odd – you’d imagine people would know how to type the social network’s URL by now (or would have set it as their homepage) – but overwhelming user interest can’t be a bad thing.

Experian Hitwise’s findings are almost sure to translate into increased advertiser interest, too, which should in turn bring Facebook more revenue.

Google, Yahoo, and MySpace, meanwhile, appear to be the organizations that will lose the most face as a result of Facebook’s gains.

Amazon Shows What People Bought (and Wanted) Most in 2010