The world’s second largest app store behind Apple iTunes, GetJar, said today that more than 50 million people have downloaded the Facebook mobile app in the past six months.

"With more than 400 million users around the world, people are increasingly looking to stay connected through Facebook from their mobile device," said Alison Rosenthal, head of mobile business development for Facebook. 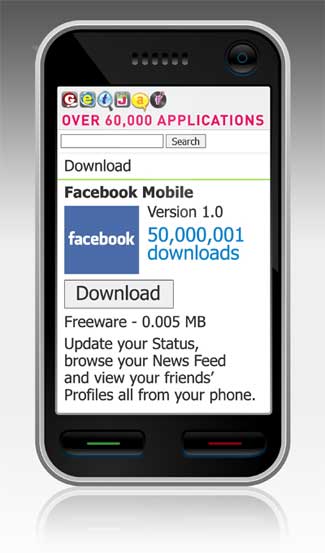 "GetJar has helped us bring the Facebook mobile experience to millions of people regardless of their mobile platform, phone model or carrier."

App downloads are forecast to increase from 7 billion in 2009 to 50 billion downloads globally by 2012, according to research from Chetan Sharma Consulting.

GetJar offers more than 65,000 mobile applications on all major handsets and platforms in more than 200 countries. More than 800 million apps have been downloaded from the Get Jar app store.