Apigee has launched a Facebook API Console. This is a free tool that allows Facebook developers to learn, debug, interact with and develop on Facebook’s Open Graph API in a more simplified way. The company tells us the vision is to make working with the Open Graph API as simple, social and functional as possible – "to let FB’s one million devs use the platform better."

"Think of it as an interactive ‘view source’ or browser for the Open Graph API," Apigee’s Shanley Kane tells WebProNews.

The console lets developers easily send and review requests and responses, learn the structure quickly, share what they see via a "share" feature, and "crawl" the graph by jumping from object ID to object ID, Apigee explains. "It shows you what your program will see… and what other programs can see about you." 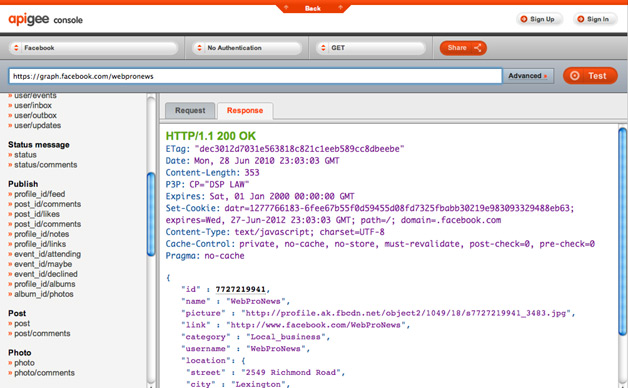 The API console can be found here. It supports Facebook’s implementation of the OAuth 2.0 draft specification. Apigee has also implemented an "awesome bar" (via Firefox).