As we wrap up 2010, there’s still more evidence online retailers came out of the holiday shopping season in good shape.  Experian Hitwise shared data indicating that retail traffic has been up on a year-over-year basis for the better part of two months.

The differences haven’t always been huge; on both Christmas and the day after Christmas, Experian Hitwise recorded just a three percent change in the market share of visits to its "Retail 500" category between 2009 and 2010.

The differences haven’t always been small, though, either.  Experian Hitwise’s Heather Dougherty reported, "The highest year-over-year increases in visits took place on Cyber Monday and Black Friday with growth of 16% and 13%, respectively."

You can have a look at more of the data below.  As you can see, the red line tends to stay above the blue one. 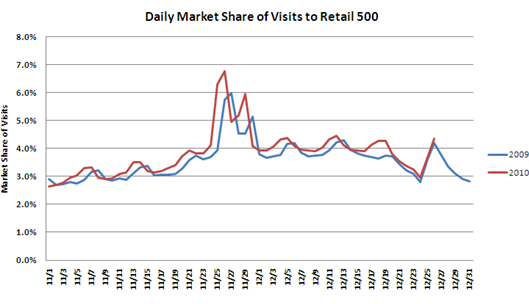 Also, if you’re curious about some further specifics, Dougherty shared, "The Apparel & Accessories category experienced the highest increases in traffic on each of the key holiday milestones, when compared to the same days last year, followed by Department Stores and House & Garden.  Visits were down for the Appliances & Electronics category from last year as some shoppers may have shifted purchases to retailers such as Amazon and Walmart.com, within the Department Stores category."

Let’s hope all of this is a sign the economy is continuing to recover.