A research project that entailed interviews with 50,000 people living in 46 countries has concluded, and some interesting facts about social networking have surfaced as a result.  A key finding is that the citizens of certain countries outside North America and Europe are much more engaged on a digital level.

TNS, which was the force behind the Digital Life project, explained in a statement, "The research shows four out of five online users in China (88%) and over half of those in Brazil (51%) have written their own blog or forum entry, compared to only 32% in the US."

Then there’s the graph below to consider, as well. 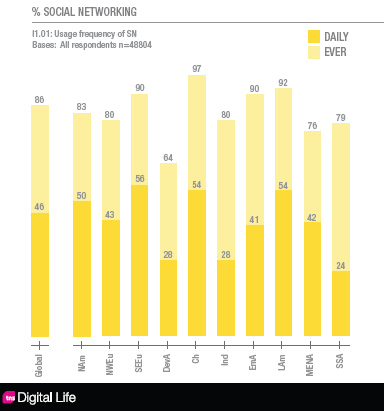 All of this speaks to the importance of the Facebook Translations app and other efforts to introduce existing sites to new communities.  The Digital Life project shows there are all sorts of potential fans for companies to win (and eyeballs to monetize).

One interesting stat about things closer to home: 36 percent of Americans think they’ll increase their use of social networks via mobile tech.