E-Reader Ownership Surges, Tablets Not So Much

Americans are embracing the pageless book.

At least that’s the impression taken from a Pew Internet study of United States adults. Pew looked at over 2,200 Americans aged 18 and over and found that e-reader use is on a sharp upswing. In Novemeber of 2010, they conducted the same survey and found that only 6% of the people reported owning an e-Reader such as a Nook or a Kindle. In May of this year, that number had doubled to 12%.

They also asked about tablet ownership and found that while growing, it is not nearly as red hot as the e-reader. In November of 2010, only 5% of people said they owned a tablet. In January of 2011 that number had risen to 7%. And by May of this year, that number is only 8%.

Takeaway – People are more willing to buy a Kindle than an iPad. 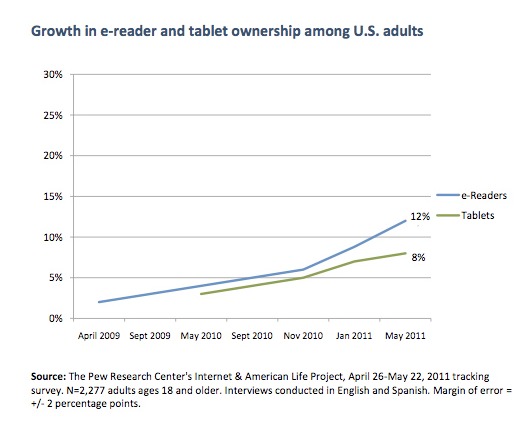 Of course, the line between an e-readers and tablets is kind of blurred with the release of some next gen e-readers. In April, the Barnes & Noble Nook Color got a massive update giving it its own email client, full flash capabilities and even its own app store. In the past, e-readers have simply been tablets with less functionality. But that description may not prove accurate as the capabilities of e-readers continue to grow.

Possibly driving the e-reader craze could be the price wars. The major players continue to offer more affordable solutions for customers. In April, Amazon unveiled its “Kindle With Special Offers,” which is an ad-supported version of the original Kindle that costs only $114 – $25 cheaper than its brother. Barnes & Noble then released the New Nook in May. The New Nook is fully touch-enabled, very small and very light, and costs only $139.

Just days later, Amazon announced the “Kindle 3G With Special Offers” which uses the same ad-supported structure of the Kindle With Special Offers but offered users 3G connectivity. That device costs $164. And then you have lesser known players with good products like Kobo, with its eReader Touch available for only $129.

Even a doubling of ownership over the last 6 months fails to catapult e-readers into the discussion of America’s favorite devices, however. E-readers and tablets still lag behind other devices like cellphones, DVR and MP3 players, which have 83%, 52% and 44% ownership respectively.

Also, only 3% of American adults own both an e-reader and a tablet, according to the study.

Have you jumped aboard the e-reader ship? Let us know in the comments.