Update: Well Daines was right in that Twitter has surpassed 100 million users. At the company’s developer conference today, Twitter announced that it has 105,779,710 registered users, as well as that it gets about 300,000 new users a day, receives 180 million unique visitors a month, and 75% of traffic comes from outside of the Twitter website.

Original Article: Each month, we look at Twitter’s growth based on total tweets and new user registrations. This data is supplied by Matthew Daines, the lead developer for our own Twitter app Twellow. 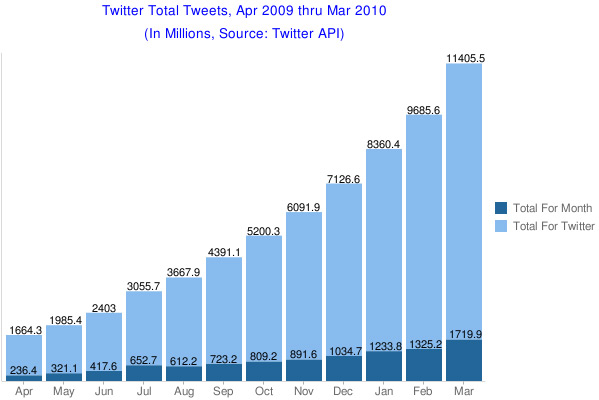 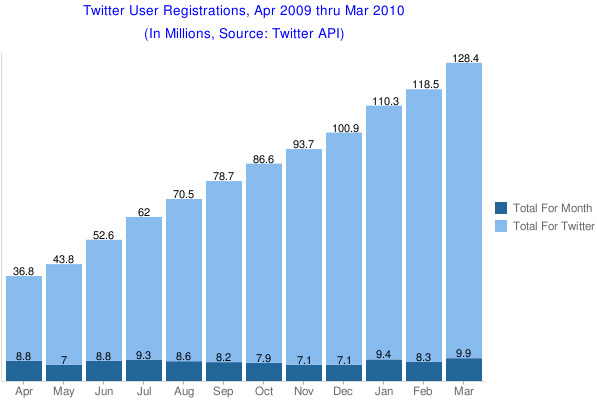 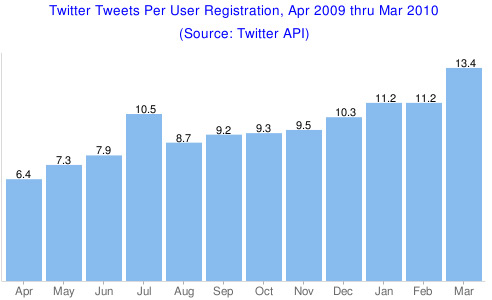 "I have a little survey script that I run now and then that queries Twitter for 1,000 random users, then I put together a few statistics based on the returns. I just ran it this morning and it came in at 20.3% suspended or non-existent,"  says Daines.

"When you take into account the likely suspended accounts at a rate of 20%, then the tweets per user is closer to 16," says Daines. "Also, assuming the actual number suspended is around 20% of the total (as my previous surveys suggest), then the total actual number of Twitter users is around 102 million, so Twitter has very likely passed the 100 million user mark."

As noted, there are some estimates and assumptions involved, so we’re not going to come right out and say as fact that Twitter has surpassed 100 million. If it has, that’s still only roughly a fourth of Facebook’s latest report of 400 million users. Either way, you can’t deny the strong growth that Twitter continues to display.