Rich Skrenta, co-founder & former CEO of Topix and NewHoo (which went on to become The Open Directory Project or DMOZ), has a new search engine called Blekko that is drawing a great deal of attention.

Blekko aims to use the public to refine its algorithms and make search results more relevant and less spammy. Can it succeed? Tell us what you think.

“We realized we could make web tools that let users sign up and help make the search engine better. If we opened up the process, we could not only get orders of magnitude more people involved than we could ever hope to employ, we could also create an open, accountable process around the search engine relevance data,” says Skrenta. “Not everyone has to participate for the model to work – most people don’t edit Wikipedia, yet we have a vast encyclopedia which long ago dwarfed the closed Britannica.”

“But a small fraction of the web audience that does get involved can help make the search experience better for everyone else,” he adds. “We’re starting by letting users define their own vertical search experiences, using a feature we call slashtags. Slashtags let all of the vertical engines that people define on blekko live within the same search box. They also let you do a search and quickly pivot from one vertical to another.” 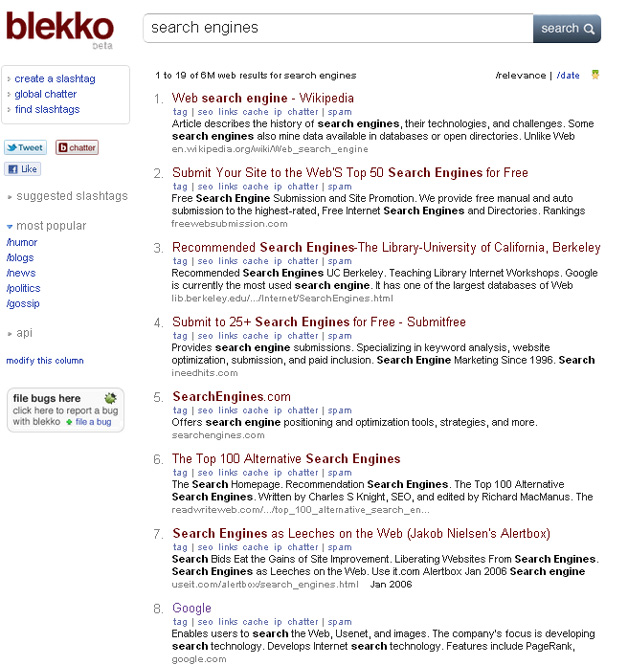 Judging from the queries compared and analyzed by Greg Sterling, Google still provides the better results (surprise, surprise), but given the fact Blekko just launched, we can cut them some slack. However, unless Blekko is going to be promoted with a huge marketing campaign the size of Bing’s it’s hard to imagine the mainstream taking much notice. Even then, it still lacks the familiar Microsoft brand, IE and Facebook integration that Bing largely benefits from.

That’s not to say that Blekko can’t find a niche, loyal audience that will appeal to some (mainly those who follow search). They do have some interesting SEO tools, which Vanessa Fox outlines.

“We have a vision of curated algorithmic search that brings quality back to the web at scale, and involves the public to get there,” says Skrenta. “We’re just getting started though, so stay tuned.”

What do you think of Blekko’s concept? Share your thoughts.