You may recall Facebook’s Gross National Happiness project, in which status updates throughout the social network are monitored for positive words to give an idea of how happy people are in general.

New Scientist reports that a computer scientist named Alan Mislove at Northeastern University in Boston (along with some colleagues) has been analyzing a similar phenomenon with tweets on Twitter. Instead of "Gross National Happiness", they call this the "Pulse of the Nation", as it looks at U.S. tweets. The team found that the west coast is happier than the east coast. New Scientist’s Celeste Biever reports: 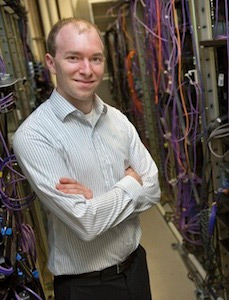 To glean mood from the 140-character-long messages, the researchers analysed all public tweets posted between September 2006 and August 2009. They filtered them to find tweets that contain words included in a psychological word-rating system called Affective Norms for English Words – a low-scoring word on ANEW is considered negative, a high-scoring one positive. They also filtered out tweets from users outside the US, and also from those in the US who did not include their exact location – for example, their city – in their Twitter profile.

That left 300 million tweets, each of which was awarded a mood score based on the number of positive or negative words it contained. For example, "diamond", "love" and "paradise" indicate happiness, whereas "funeral", "rape" and "suicide" are negative. "Dentist" is fairly neutral.

It’s an interesting project, but Twitter just doesn’t have the amount of users Facebook does. In fact, just today Facebook announced that it has surpassed 500 million. I don’t know accurate a picture of happiness Facebook status messages paint, but I would imagine it’s a bit more of a complete picture than would be represented by Twitter. 500 million users around the world.