Demand Media issued a statement in response to Google’s algorithm change, announced last night. The update "noticeably impacts" 11.8% of Google queries, according to Google. While Google’s announcement doesn’t come right out and use the phrase "content farms", the update is widely considered to be aimed at them.

Demand says that some of its content did drop in rankings, but that some of it also rose. Here’s the meat and potatoes of the statement from Larry Fitzgibbon, Demand Media’s EVP of Media and Operations:

Today, Google announced an algorithm change to nearly 12% of their U.S. query results. As might be expected, a content library as diverse as ours saw some content go up and some go down in Google search results. This is consistent with what Google discussed on their blog post. It’s impossible to speculate how these or any changes made by Google impact any online business in the long term – but at this point in time, we haven’t seen a material net impact on our Content & Media business.

Coming out of the IPO quiet period this week, we knew the topic of Google’s search engine changes was top of mind for many people — so we discussed it on the earnings call, in a couple of follow up interviews and are now issuing this statement. However, we generally don’t comment or speculate on changes by major search engines. They make changes nearly daily in a quest to give consumers the best possible experience, as do we.

Finally, in our Q4 earnings call on Tuesday we talked at length about the nature of our content and the consumer experiences we are delivering. Beyond our success helping consumers discovering our content via search, we also shared metrics around direct visits, repeat visits and social visits. We believe these metrics are leading indicators that our properties are developing into recognizable consumer brands that are delivering real value to an increasingly loyal community.

You can read the full statement here.

It’s interesting that Google won’t come out and say "content farms" this time, even though they had no problem using the phrase before. When Danny Sullivan asked Matt Cutts about it, he simply said, "I think people will get the idea of the types of sites we’re talking about."

The last time Google made a big update, the company said shortly beforehand, "As ‘pure webspam’ has decreased over time, attention has shifted instead to ‘content farms,’ which are sites with shallow or low-quality content." This led to everyone assuming the update was the content farm update, but we analyzed Google’s wording carefully, and that didn’t make sense, as we acknowledged early. Eventually, everyone else realized this too, and Cutts confirmed it.

It makes more sense that this one actually is at least part of the company’s content farm strategy. "This update is designed to reduce rankings for low-quality sites—sites which are low-value add for users, copy content from other websites or sites that are just not very useful," says Google. That sounds more on the money.

Demand Media has always defended its content, but it has started a new defensive strategy, in which it will be openly talking about it a lot more, as indicated in the company’s recent earnings call, then in an interview with PaidContent (our analysis of that here).

Now, it’s time to let this update sink in a little bit and do some searching. Let’s see just how much Google’s results have really improved. As Rich Ord pointed out, eHow is still ranking for "level 4 brain cancer".

On a somewhat unrelated, but semi-amusing note, since I installed Wajam the other day (which puts content from Facebook/Twitter into your Google results), the top result for "level 4 brain cancer" for me came from Demand Media CEO Richard Rosenblatt himself, sharing a link from Demand Media’s LiveStrong site. It’s not a relevant result (which is more because of the nature of how Wajam works), but Demand Media’s even penetrating my social result. It just seemed worth mentioning. 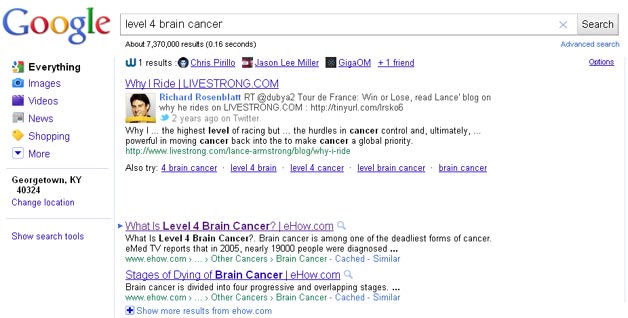