Coca-Cola has launched a new Facebook campaign to raise awareness of Earth Month and help support Ocean Conservancy, the oldest and largest marine conservation organization in the U.S.

Through a new Facebook application, users will be able to choose from one of four underwater settings and place a photo of themselves into the setting of their choice. For every person who uses the underwater photo app, Coca-Cola will donate $1, up to a total of $200,000, to support Ocean Conservancy’s marine debris program identifying policies to prevent trash from reaching the ocean and waterways. 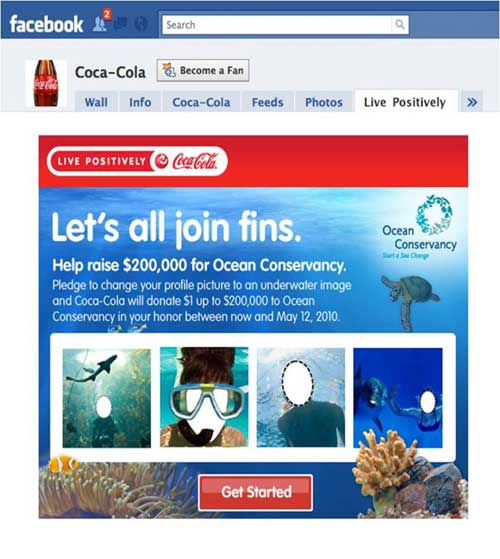 Also, via the company’s MyCokeRewards points program and a direct donation-matching program through LivePositively.com, Coca-Cola will contribute up to an additional $50,000.

Facebook users will be able to share and embed the underwater image within their own profile and also via the site’s newsfeed. The underwater images can be saved to a "Let’s All Join Fins" photo album, which can be share with Facebook friends.

"Ocean Conservancy is just one of the many ways we are engaging people to lessen their climate footprint — not just during Earth Month, but all year long," said Celeste Bottorff, Vice President, Living Well, Coca-Cola North America