CNN is reportedly suing a man who claims to be one of its iReporters. If you’re unfamiliar with iReport, it’s CNN’s citizen journalism site. This is a destination where regular people can submit news stories, and if CNN deems them worthy, they may pick them up for mainstream coverage. One such person has been going around giving himself titles like iReporter for CNN, and the news organization evidently doesn’t like that.

"The world of journalism and news is changing before our eyes. As an industry, we are able to reach small villages around the world as well as untold stories right here in the U.S. But the sites that host these communities have to be smart and use the technology, editors and community they host, to separate the wheat from the chaff."

"We are empowering people to report for the nation and for the world – these contributors/reporters should be able to identify themselves as such and claim that title," adds Tareen. "It’s up to the CNNs of the world to help readers understand what is legit and what is not, not rely on lawsuits to do the work."

The man CNN is reportedly suing is named Robert Paisola. His blog is titled "Robert Paisola: The Life of a CNN I Reporter". According to the Hollywood Reporter, he had a CNN logo on his Twitter account (though this is not present anymore), and has CNN in his Twitter bio (Hat Tip: BI). 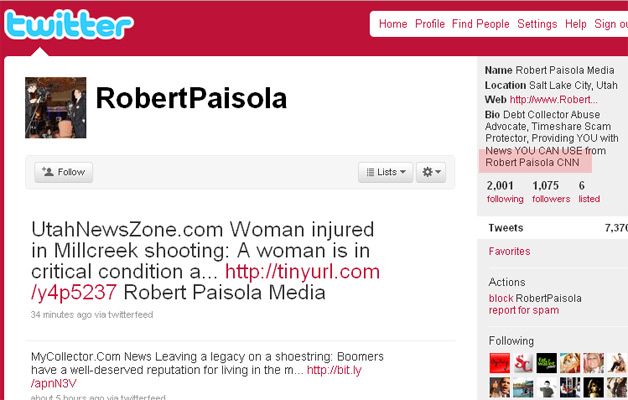 The man has been accused of numerous nasty things, and it isn’t hard to see why CNN wouldn’t want to be associated with him, as the Hollywood Reporter points out. There is also some suspect info on his LinkedIn profile as discussed here.

It’s not exactly clear whether or not Paisola has actually contributed content to iReport. If not, CNN would certainly have a legitimate beef. If he has, however, Tareen’s point has some merit of its own. Given the amount of shadiness around this guy’s reputation, CNN likely has the upper hand here, but reputation isn’t law (granted I have no legal expertise).

Both CNN and Paisola have been hard to reach for comments on the matter.

If you do contribute to iReport, should you be able to call yourself a CNN iReporter? Tell us what you think.