You can have a look at stats from AppData that put CityVille right on the verge below.  Meanwhile, the game’s official Facebook Page says it has a little over 100 million users.  Either way, CityVille’s advance might be slowing a little, but it hardly looks like the game’s growth rate will go negative or top out in the immediate future. 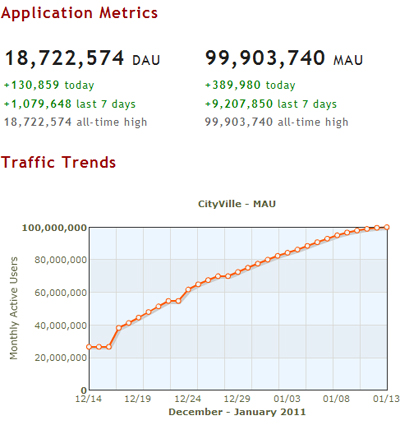 So here are a few more interesting points related to CityVille’s popularity: right around Christmas, it officially became the top game on Facebook, passing everything Zynga and other app makers had come up with before.

Also, Facebook’s last official count put the entire social network’s user base at just 500 million people, and so while that number’s sure to have increased since July, a significant fraction of users are CityVille fans.

Then consider this: Twitter only announced hitting the 100 million user mark in April of last year.

Congrats to the Zynga team.