95,333 clicks in the first hour. 412,000 clicks in 48 hours. A trending topic on Twitter (worldwide). Internships.com received 74,040 applications from 181 countries. These are all things achieved by a single tweet from Charlie Sheen.

More specifically, they’re stats provided by Ad.ly, who organized this paid tweet by Charlie Sheen, on behalf of Internships.com. Does this represent the power of Twitter or the power of Charlie Sheen? Perhaps both.

“On Monday morning, Internships.com was a start-up with a good product. By Tuesday morning, it was a brand with a promising future,” wrote Ad.ly CEO Arnie Gullov-Singh on his company blog. “Success on this scale is rare to achieve outside of a multi-million dollar Super Bowl ad. But with 1,000 celebrities available to endorse brands in social media, Super Bowl moments have become much more accessible and measurable.”

Internships.com has posted the following infographic about the tweet:

Research firm Wedbush takes a mor in depth look at Twitter endorsements, and the Charlie Sheen affect in this report (embed courtesy of the New York Times’ DealBook):

Here’s an interesting question on a side note: Why is Google ranking as suspended account for “ChuckSheen” over Charlie Sheen for a “Charlie Sheen on Twitter” search? 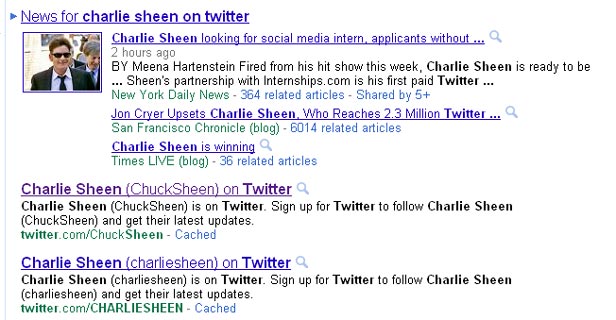