Charlie Sheen: The Unedited Version, Sure To Go Viral

Charlie Sheen has seemingly turned insanity into big business with the help of social media and the Internet. It wasn’t too long ago when he joined Twitter, and ever since, the world has watched him spiral further and further into marketable craziness.

Not since John Travolta’s transformation from the star of “Look Who’s Talking Now” to the star of “Pulp Fiction” has there been such a reinvention of an actor’s career.

The latest of Sheen’s escapades can be seen in this video posted to the Charlie Sheen YouTube channel (Warning: Some viewers may find this somewhat disturbing):

@charliesheen
Charlie SheenRT @RDisher This @charliesheen video made me laugh harder than the whole 8th season of 2.5 men http://www.youtube.com/watch?v=2LtBSqGzi3o

Sheen is even using his YouTube channel, which currently has 6,512 subscribers (that will surely skyrocket as this video continues to go viral), to market Charlie Sheen merchandise, which is being sold at the Charlie Sheen Official Store. Here you will find various shirts, hats, shot glasses, key chains, etc. 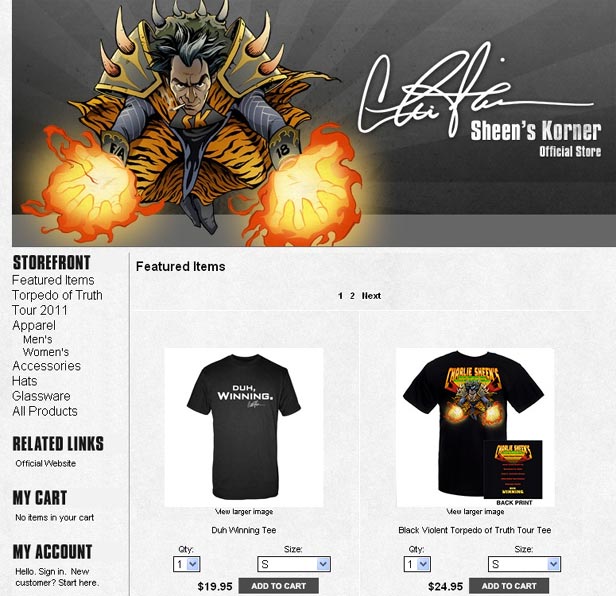 Sheen may have lost his job at Two and Half Men, but he’s certainly keeping busy. He’s also on tour, both upsetting and pleasing fans.