Microsoft announced today that it has signed a multiyear marquee partnership with the Seattle Storm and the Women’s National Basketball Association (WNBA). A representative for Bing tells WebProNews that the following will represent the following opportunities for Bing:

– Bing will be able to share its brand with a devoted and passionate fan base.

– Bing will be the official decision engine of stormbasketball.com.

–  Bing logo and name will appear on the front of the Storm’s home and visitor jerseys and shooting shirts, and in-arena signage.

–  Storm will debut its new uniforms when the team hits the court for the season opener of its 11th season on Sunday, May 2.

–  Bing is the third major marquee partner to the WNBA. 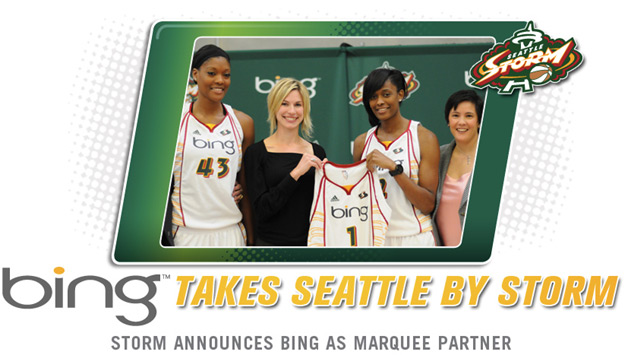 "The Seattle Storm is a major sports franchise in a major market, and we are thrilled to join with them and invest in our hometown," said Danielle Tiedt, general manager of Marketing for Bing at Microsoft. "Bing shares in the passion and dedication that the Storm organization has for the Seattle community and this partnership helps Bing reach the Storm’s dedicated fan base in a unique way."

Bing is certainly not letting up on the marketing.

Storm President and CEO says both the Storm and Bing are "leading organizations in our respective fields." I wonder what Google would have to say about that or 2009 WNBA Champions the Phoenix Mercury for that matter.