British adventurer turned ultimate badass Bear Grylls obviously has a great sense of humor. Earlier, he tweeted something that is likely to shoot him straight to the top of internet glory.

But first, a little back-story.

Bear Grylls is, of course, the host of Man vs. Wild (Born Survivor in the UK). The show, a huge hit both here and abroad, puts the former British Special Forces member in prickly situations in unyielding climates and videotapes him as he provides survival tips for such situations.

Throughout the history of the show, Bear has done some pretty remarkable things in the name of “survival.” He has wrestled alligators, slept inside a camel carcass, free-climbed waterfalls and even squeezed liquid out of elephant dung for hydration. But one certain survival trick gained him internet fame.

The drinking of his own urine on the show became a meme where creators would come up with various, sometimes banal circumstances for the drinking of one’s pee. The meme, commonly referred to as “Better Drink My Own Piss,” always used the same photo as a template. Here are some notable examples, courtesy of Know Your Meme. 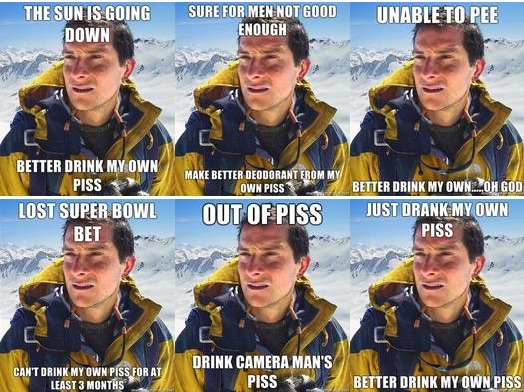 And here’s the video from Man vs. Wild that started the meme:

So what did Bear do to thrust him into the annals if memedom? He acknowledged the meme and even participated in the furtherance of it via Twitter, saying “On Vacation in L.A., looks like I’ll have to drink my own pee.”

@BearGrylls
Bear GryllsIn honour of all your @replies about pee drinking. am on vacation in LA. Looks like I’ll have to drink my own pee! http://twitpic.com/4z1fdh

The twitpic given is our lead photo, of Bear carefully drinking from a teacup. Many of the replies from his followers on Twitter say things like “You’re my Hero” and “You’re the classiest urine drinker I know.”

Tip to celebrities: If you are associated with a popular internet meme, embrace it! The interwebs will love you. And you may become legend. Just don’t attempt to monetize your meme, like Chuck Norris did with his self-authored Official Chuck Norris Fact Book.

May 18, 2011
Latest Posts
Registration is disabled.