Twitter fanatic, searcher of lost cars and new Two and a Half Men star Ashton Kutcher has just unveiled A+, his very own desktop Twitter application.

A+ is a free download, and is sure to come at the delight of Ashton fans everywhere. It has the functionality of most other twitter apps – list creation, link shorteners, long tweet capabilities, easy mentions and retweets, etc.

But for people who aren’t Ashton Kutcher fanatics, what would be the point of switching to his Twitter app? From what I can gather, it involves the concept of “social surfing.” A+ allows you to browse the content that the people you follow have tweeted, whether is be videos, pics or articles – without having to open a browser window. Tech Crunch explains the cache system:

The biggest reason is a feature called LivePreview: as you read through your Twitter stream, the app will actually pre-cache links that have been shared by the people you follow. Click one, and the page will pop up in a custom browser within the application — you don’t have to swap to another window. Hit the down arrow on your keyboard, and the minibrowser will show whatever the next piece of shared content is, be it a photo or a website. Because this content is precached, you can probably browse through these links more quickly than you would with a traditional Twitter client. It actually feels a bit like jumping through articles in an RSS reader. 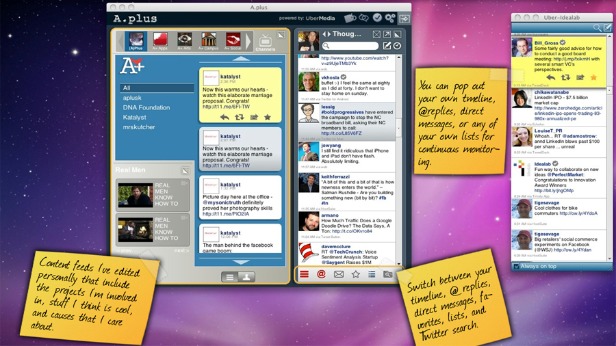 Also, along with your timeline, an Ashton-centric section is built into the app. “My Channels” are lists created by Kutcher following different categories like “A+ Arts” and “A+ Social.” Many of the accounts followed here are tied to Kutcher himself, such as his charity the DNA Foundation.

It makes sense that Ashton Kutcher would develop his own Twitter app. I mean, the guy’s got almost 7 million followers, making him one of the most popular users around. He was one of the first real celebrity endorsers of the Twitter service and is an incredibly active Tweeter.

But the app is powered by UberMedia, who has a history of little spats with Twitter over their third-party apps. Twitter once shut down UberMedia clients UberTwitter and Twidroyd for a brief time, saying that they violated their API policies. UberMedia even tried to acquire third-party app TweetDeck, but its looks like Twitter won that battle as they are expected to close with TweetDeck any time now.

So it’s a little odd that he would make an app powered by UberMedia, considering their past beefs with Twitter.

Liz Gannes at All Things D explains her “conspiracy theory:”

So why is Kutcher, aka Mr. Twitter, working with UberMedia? Not to be a conspiracy theorist, but you have to wonder if Twitter slighted Kutcher by not thanking him enough for his endless promotion of their service.

It might just be that UberMedia was the first to want to work with Kutcher on the app – there is definitely room for money to be made in a venture like this. The A+ app already contains a couple of banner ads and a zip code prompt for a deals service.

May 23, 2011
Recent Posts
Registration is disabled.