Apple is holding a press conference tomorrow at 10 a.m. Pacific Time to address the issues surrounding the iPhone 4 and it antenna problem.

Many users of the iPhone 4 have reported weak reception when it’s held a certain way, leading to it being called the "iPhone 4 death grip." 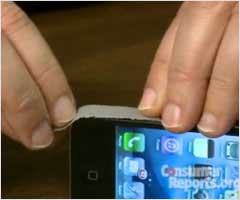 Earlier this week Consumer Reports said it could not recommend the iPhone 4, but did mention attaching duct tape to the antenna gap to remedy the reception issues.

"Apple needs to come up with a permanent-and free-fix for the antenna problem before we can recommend the iPhone 4," Consumer Reports said.

The controversy surrounding the iPhone has even attracted the attention of Senator Charles Schumer (D-NY) who said in a letter to Apple CEO Steve Jobs that the solutions offered to fix the problem have been "insufficient."

"The burden for consumers caused by this glitch, combined with the confusion over its cause and how it will be fixed, has the potential to undermine the many benefits of this innovative device," Schumer wrote.

"To address this concern, I ask that Apple provide iPhone 4 customers with a clearly written explanation of the cause of the reception problem and make a public commitment to remedy it free-of-charge. The solutions offered to date by Apple for dealing with the so-called "death grip" malfunction-such as holding the device differently, or buying a cover for it-seem to be insufficient."