Penny-pinching Google shareholders should perhaps look away.  Your money isn’t being used in the most responsible manner.  But it’s at least helping many of the rest of us smile, as Google’s once again installed an unnecessarily large statue in commemoration of the latest version of the Android operating system.

You can have a look at the Honeycomb sculpture for yourself below, courtesy of Justin Mattson, a developer advocate at Google.  Mattson noted in a tweet, "Honeycomb arrives.  I think we’re getting more fanciful with these things." 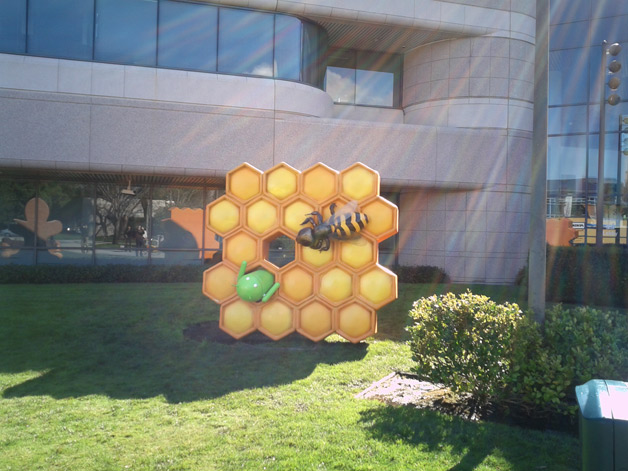 He’s right, too.  Up until now, the dessert statues have just represented desserts.  (Or at least, the Froyo monument came in a cup, but there haven’t been any accessories like spoons or gigantic oven mitts.)  The new bee and Android figures are a bit out of place.

Otherwise, as long as we’ve got this pic, let’s take a moment to observe a few interesting things about Google’s campus.  Window reflections show the Eclair and Gingerbread sculptures, along with a Penske truck (which was perhaps used to deliver the Honeycomb statue).

So Google isn’t for some reason disposing of old statues when new ones arrive, and despite having a fleet of plug-in vehicles and a self-driving Audi TT, the search giant apparently doesn’t have its own truck.

Then it’s possible to see a security camera, as well, only it’s a good bet the camera’s more of a deterrent than anything, since Google could no doubt get its hands on a smaller device.

Facebook Will Give Your Mobile Phone, Address Info to Developers Again

Google Loses Gmail Users' Email, Says It Will Be Back in Hours