Texting by American adults has increased significantly over the past year, but still does not approach the level of text messages exchanged by young people, according to a new report from Pew Internet & American Life Project. 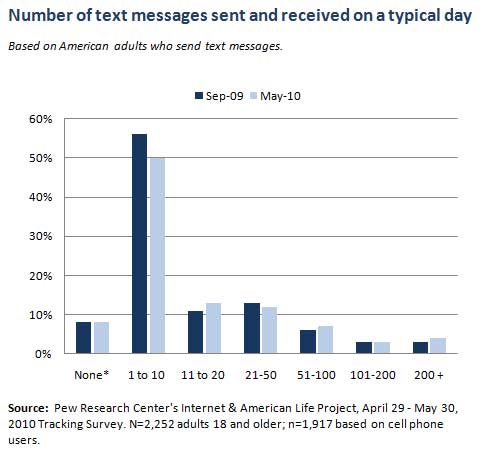 “Texting among adults has reached the mainstream and the charge is being lead by African-Americans, Hispanics and young adults,” said Amanda Lenhart, Senior Research Specialist at the Pew Research Center’s Internet & American Life Project and author the report.

“Of course, none of these adult groups hold a candle to teens when it comes to texting, who swamp adults in messages sent per day by a factor of 5.”

For all of their enthusiasm for texting and talking on their cells, Americans have mixed feelings about the role of the mobile phone in their lives. Most cell users report that their cell phone makes them feel safer (91%), and that they appreciate the way it allows them to arrange plans with family and friends (88% agree.)  But mobile phone users also report that they get irritated when a call or text interrupts them (42%) and that they find it rude when others check their phones repeatedly during meetings or conversations (86%).

Other highlights of the report include:

*65% of American adults with cell phones sleep with their phone on or right next to their bed.

*57% of adults with cells report receiving unwanted or spam text messages on their phone.

*90% of parents have a cell phone compared with 72% of adults without children under 18 at home.