"One social media element of the new Red Cross blood donor site is the ‘Blood Donor Community’ page, which enables donors and volunteers to share personal stories and encouragement of their experiences on donating blood, along with enabling them to send e-cards, link up via Facebook and view Red Cross videos," a representative tells WebProNews.

"Another social media element to the site is users can participate in ‘virtual blood drives.’ For example –  Michigan State Alums (spread around the country) can go to their local blood centers and donate – receiving credit for their virtual group," she adds. 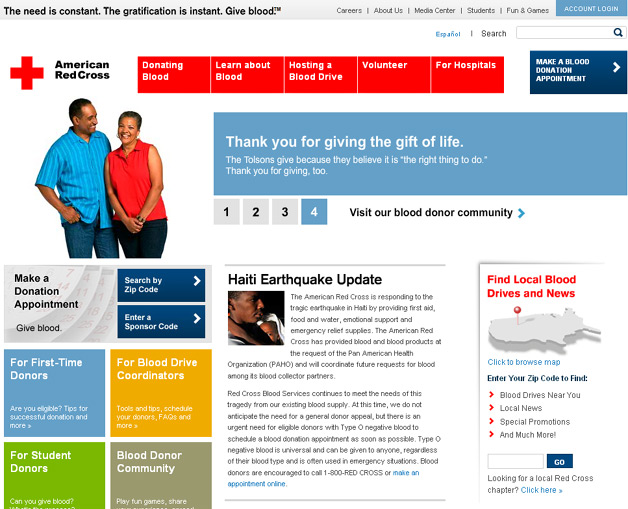 In addition to increasing blood donation, other objectives for the site include reducing costs related to site maintenance, and delivering a "world-class user experience." Previously, the Red Cross had over 30 different "Blood Region" sites with varying styles and content, but with this new site, they are all brought together.

"BusinessOnLine has done an outstanding job of creating an intuitive, user-friendly site which we expect to meet or surpass our business objectives.  Their end-user focused approach allowed us to put our resources where they mattered most," said Greg Haines, online marketing manager for American Red Cross Biomedical Services.

The American Red Cross considers the site the "go-to" solution for anyone wishing to engage with Red Cross Biomedical Services online. That goes fro blood donors, as well as volunteers and hospitals.