The service is free for 5GB. For 20GB, it’s free for one year with the purchase of an MP3 album. There are additional storage plans starting at $20 a year. Users can store music, videos, photos, and documents. Here are the storage plans: 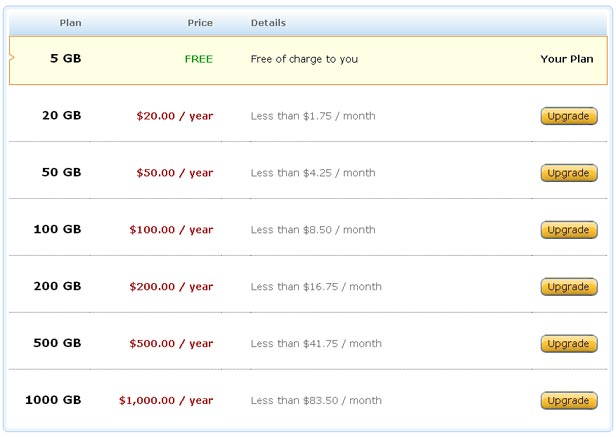 “We’re excited to take this leap forward in the digital experience,” said Bill Carr, vice president of Movies and Music at Amazon. “The launch of Cloud Drive, Cloud Player for Web and Cloud Player for Android eliminates the need for constant software updates as well as the use of thumb drives and cables to move and manage music.”

“Our customers have told us they don’t want to download music to their work computers or phones because they find it hard to move music around to different devices,” he added. “Now, whether at work, home, or on the go, customers can buy music from Amazon MP3, store it in the cloud and play it anywhere.”

Amazon’s news come ahead of an expected service from Google. As previously discussed, Google Music, which should come with Android Honeycomb, could be of great significance to Google’s overall strategy in social, mobile, and in some ways even search. Amazon will certainly factor into the equation, already with a strong lead in terms of selling digital music. Many Android users are already accustomed to downloading songs through Amazon’s simple MP3 Store Android app.

It’s quite interesting how Amazon appears to be using Google’s own Android platform to compete with Google, and not only with music. Last week, Amazon launched the Amazon Appstore for Android apps.

It goes without saying that Amazon’s new offering will also help it compete with iTunes. Being the web’s largest retailer doesn’t hurt either.