Woot, the 24-hour deal site with a wacky sense of humor, has been acquired by Amazon.  Woot fans needn’t worry that all the fun’s coming to an end, however, as official announcements concerning the deal have so far been both completely reassuring and nearly nonsensical. 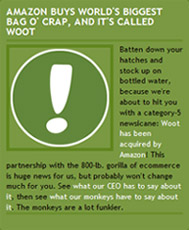 Here’s part of an email Woot CEO Matt Rutledge sent to his employees (and posted on the official Woot blog): "[W]e plan to continue to run Woot the way we have always run Woot – with a wall of ideas and a dartboard.  From a practical point of view, it will be as if we are simply adding one person to the organizational hierarchy, except that one person will just happen to be a billion-dollar company that could buy and sell each and every one of you like you were office furniture."

Rutledge then added, "Nevertheless, don’t worry that our culture will suddenly take a leap forward and become cutting-edge. We’re still going to be the same old bottom-feeders our customers and readers have come to know and love."  So there you have it.

Unfortunately, one major detail – how much Amazon paid for Woot – wasn’t addressed in Rutledge’s letter or a separate blog post.  Or in a video featuring a rapping monkey puppet (no kidding).  And it doesn’t look like that omission was an oversight, meaning we may have to wait a while before anyone decides to disclose that piece of information.

Still, given Woot’s lasting popularity, it could be hard for anyone to argue with Amazon’s decision regardless of the sum.