American adults are just as likely to have texted while driving as teenagers and are significantly more likely than teens to have talked on their cell phones while driving, according to a new report from the Pew Internet & American Life Project. 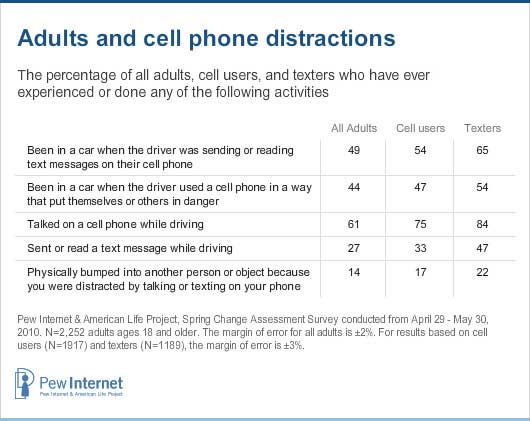 "While previous research has shown that one in four teen drivers text at the wheel, this data suggests that adults are now just as likely to engage in this risky behavior" said Mary Madden, Senior Research Specialist at the Internet & American Life Project and co-author of the report.

"Adults may be the ones sounding the alarm on the dangers of distracted driving, but they don’t always set the best example themselves."

Other findings from the report include:

*51 percent of men who use text messaging say they have sent or read messages while driving compared to 42 percent of women who have done the same.

"It is just as hard for adults as it is for teenagers to resist chatting with friends and sending off that quick text even in the midst of heavy traffic," said Lee Rainie, Director of the Internet & American Life Project and co-author of the distractions report.

"Constant mobile connectivity to friends, family and colleagues is a hallmark of age and it is hard to resist even in situations where it would seem smart to stay focused on the task at hand."

Lakers Win Over Celtics Gets Twitter Record Tweets Per Second