The American Civil Liberties Union and other groups filed a lawsuit today challenging the Department of Homeland Security’s (DHS) policy allowing border agents to search laptops or other electronic devices at the border without reasonable suspicion. 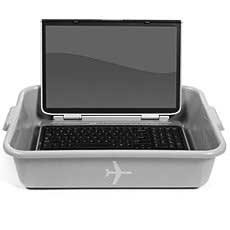 The lawsuit was filed by the ACLU, the New York Civil Liberties Union and the National Association of Criminal Defense Lawyers.

DHS asserts the right to look though the contents of a traveler’s electronic devices – including laptops, cameras and cell phones – and to keep the devices or copy the contents in order to continue searching them once the traveler has been allowed to enter the U.S., regardless of whether the traveler is suspected of any wrongdoing.

“These days, almost everybody carries a cell phone or laptop when traveling, and almost everyone stores information they wouldn’t want to share with government officials – from financial records to love letters to family photos," said Catherine Crump, staff attorney with the ACLU Speech, Privacy and Technology Project.

"Innocent Americans should not be made to feel like the personal information they store on their laptops and cell phones is vulnerable to searches by government officials any time they travel out of the country."

Today’s lawsuit was filed on behalf of the National Press Photographers Association (NPPA), whose members include television and still photographers, editors, students and representatives of the photojournalism industry; NACDL, which is a plaintiff as well as counsel on the case; and Pascal Abidor, a 26-year-old dual French-American citizen who had his laptop searched and confiscated at the Canadian border.

“Unchecked government fishing expeditions into the constitutionally protected materials on an innocent traveler’s laptop or cell phone interfere with the ability of many Americans to do their jobs and do nothing to make us safer," said Melissa Goodman, staff attorney with the ACLU National Security Project. "

Between October 1, 2008 and June 2, 2010, over 6,500 people—nearly 3,000 of them U.S. citizens, were subjected to a search of their electronic devices as they crossed U.S. borders, according to a separate Freedom of Information Act lawsuit filed by the ACLU.

Google Scribe Predicts What You're Going to Type