It was only a matter of time before a movie was made, based on Seth Grahame-Smith’s New York Time’s bestselling book, Abraham Lincoln, Vampire Hunter. The book which spawned this legendary cover (which poses as a decoration in my house). 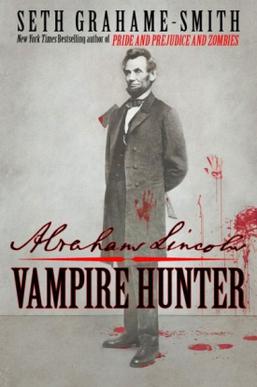 The movie has been in the works for some time now, and now we have an official trailer to enjoy. There’s a lot of Lincoln action, mixed in with some old time US imagery. With my favorite moment occurring at the (1:06) mark.

The reaction on Twitter seems to be divided, with some who ‘get it’, while others are frowning upon it…

@alwayswatching
Adam QuigleyBeyond excited for ABRAHAM LINCOLN: VAMPIRE HUNTER. Playing it deadly serious makes it so much funnier. Why the apprehensive response?

@JacobSHall
JacobABRAHAM LINCOLN: VAMPIRE HUNTER looks like the stupidest movie ever made, so I’m going to be there opening day, Movie Pass in hand.

1 minute ago via web ·  Reply ·  Retweet ·  Favorite · powered by @socialditto

@theravendesk
SumayyahAbraham Lincoln as a vampire hunter. Yes. Good. My life is complete.

1 minute ago via TweetDeck ·  Reply ·  Retweet ·  Favorite · powered by @socialditto

3 minutes ago via web ·  Reply ·  Retweet ·  Favorite · powered by @socialditto

@EricVespe
Eric VespeI’m getting old and cranky, I think, because 90% of trailers look like previews for fake movies to me. cc Abe Lincoln Vampire Hunter

2 hours ago via web ·  Reply ·  Retweet ·  Favorite · powered by @socialditto

While I’m in league with those who are beyond excited for the movie, I still scoff at Hollywood’s need to feature licensed music in every trailer they release. I love Johnny Cash as much as the next guy/gal; it just doesn’t get me excited for this movie.