Amazon CEO Jeff Bezos is throwing some of his capital behind an ambitious project that has been decades in the making. $42 million to be exact. A team of scientists and engineers is currently working on giant clock that will be stationed inside of a mountain. The clock will run for 10,000 years.

According to Wired, the project is already underway. Last year, contractors began assembling the components to the clock and excavation began at the mountain site that will become the clock’s final resting place. As the clock will run on solar power, computers at Jet Propulsion Laboratories have spent the last year calculating sun positions for the next 10 millennia.

The “father of the clock” is a man named Danny Hillis. The millennium clock has been on his mind since 1989. For him and for Bezos, it’s all about long term thinking. Bezos has set up a website for the project, at 10000yearclock.net.

There, he describes the project in brief. The clock will be stationed deep inside a mountain in the West Texas Sierra Diablo Mountain Range. The clock will tick once a year, and the century hand will advance every 100 years. And every time it hits 1000 years, a cuckoo will emerge. 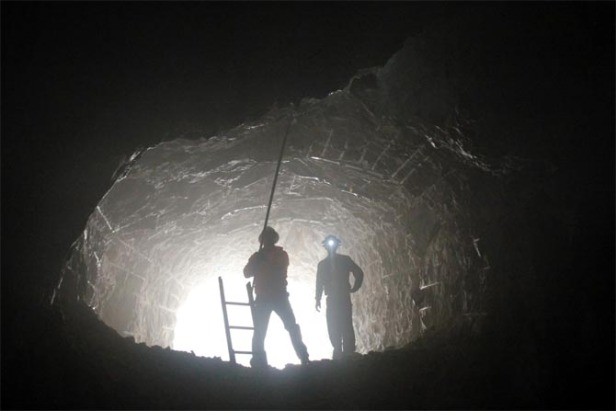 Visiting the clock, once it is completed in the next few years, will not be an easy venture. Here’s what Wired says about accessing the clock according to their interview with Bezos and the team –

To get to the clock, you’ll need to hike half a day to the base of the mountain in which the clock is embedded. You’ll walk up into a narrow notch of stone, coming at last to a door made of stainless steel with panels of green nephritic jade. The door leads into a tunnel, which ends at the base of the vertical shaft, in darkness. Taking a flashlight to see, you’ll start climbing up the spiral staircase, winding around the outer wall of the shaft, going past various parts of the clock as you go.

One of the first sections you’ll pass is the power train, with huge suspended stone weights and a capstan that you can turn to raise the weights and wind the clock. Once wound, the energy of these weights will help power the clock and its chimes.

You’ll then walk past the mechanical computer (a complex collection of gears and linkages) that rings the clock’s chimes, and a bit further up, the actual chimes.

If it’s been wound, the clock will ring the bells once a day, playing a different tune each time. The mechanical computer will rearrange the notes to create a unique melody for almost every one of the next 3,650,000 days. (Musician Brian Eno is helping compose the music the chimes will play.)

The clock itself will be impressively huge and mechanical, with giant gear wheels made out of stainless steel turning on ceramic bearings, as well as smaller pinions made out of titanium. There will be no way to see it all at once — you’ll have to climb through a couple hundred vertical feet to see all its parts, one by one, ending at the clock face in the uppermost room.

If you still want to make the commitment to go see the clock once it is completed, Bezos asks you to send a blank email to [email protected]

What is the point of this millennium clock? Why take on such an undertaking and invest so much money into a project that will be located in such a remote area? Long-term thinking. According to Bezos, we now have the technology to build this amazing clock so we should.

“Over the lifetime of this clock, the United States won’t exist,” Bezos says. “Whole civilizations will rise and fall. New systems of government will be invented. You can’t imagine the world — no one can — that we’re trying to get this clock to pass through.”

Bezos and the crew are thinking about this clock in the same way we think about the Pyramids. They are symbols of time, and of history. Thousands of years from now, Bezos wants people to visit the clock and see it still working. Whatever civilization looks like in 10,000 years, those people will have a glimpse into the past. And by building a clock like this, it allows us in the present to glimpse into the future.

But it sure is a lot of money, even for a project this cool. Some people are asking if the project is truly necessary –

@hownottowrite
Jamie GroveWhat do you think about my new blog idea? “Crazy People With Too Much Money” Subject of the first post: http://bit.ly/iiP6Xv

2 hours ago via TweetDeck · powered by @socialditto

@7son75
Mark PannellJeff Bezos is clearly sitting on too much cash.

@TekJim
Jim AmatoIs it just me or is this the definition of a guy with a lot of money and too much time on his hands(no pun intended)? http://t.co/sRvb3z3

Most of the internet chatter surrounding the project seems to be positive, however. The most commonly used phrases to describe it are “Wow,” “Amazing” and “Awesome.” I believe I fall into that camp.

Bezos is also looking for future generations to create “anniversary chambers” for the clock. Here’s what he has to say about that on the site –

Carved into the mountain are five room-sized anniversary chambers: 1 year, 10 year, 100 year, 1,000 year, and 10,000 year anniversaries. The one year anniversary chamber is a special orrery. In addition to the planets and the Earth’s moon, it includes all of the interplanetary probes launched during the 20th century, humankind’s first century in space. Among others, you’ll see the Grand Tour: Voyager 2’s swing by of Jupiter, Saturn, Uranus, and Neptune. The Clock will activate and run the orrery once a year on a pre-determined date at solar noon.

Sounds like a awesome project. Maybe whoever inhabits this planet in 10,000 years will stumble upon the clock and will view it like we view Stonehenge. At least I’m sure that’s what Jeff Bezos hopes.

Erin Andrews Is Still Pissed About That Leaked Internet Video

Hulu Plus on Android Now a Reality