YouTube has announced its support of a site called FriendlyMusic from RumbleFish. The site lets YouTube users purchase a lifetime license to edit songs into their videos.

A user can find pre-cleared music for YouTube on the site, then purchase an mp3, and use it in videos.

Since its launch, YouTube has pioneered ways for users to get professional music into their videos while respecting copyright — and generating revenue and promotion for artists, songwriters, and music companies. Through Content ID and a series of unprecedented deals with music labels and publishers, we’ve turned user-made music videos into a business opportunity as well as a form of expression. With Audioswap, we built a library of songs you can drop right into your existing YouTube uploads. And with countless artists, we’ve hosted DIY music-video contests and film festivals.
To be clear, many of the FriendlyMusic tracks are still available for free in Audioswap. What’s new is that the FriendlyMusic store offers you up-front reassurance that specific songs are pre-cleared for your video — plus the ability to edit those songs in your own video editing tools, at the point of creation. This marks the first time a music company has offered YouTube users a direct license. We’re excited about it and we hope you are too. 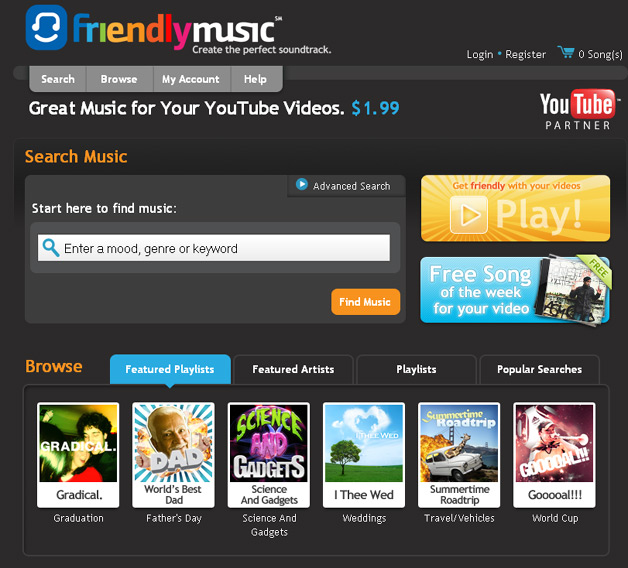 According to YouTube, once a user buys a cleared song from the site, it is licensed for unlimited views. Unfortunately the selection is quite limited. Hopefully that will change in the future.